Posted by The Market Oracle 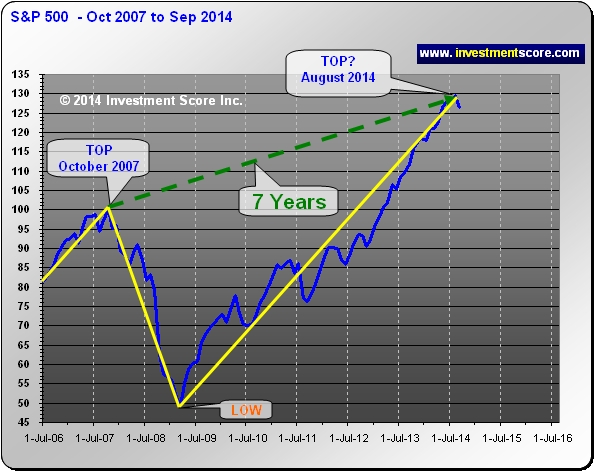 From a duration perspective, is the current uptrend in today’s stock market getting risky? Based on history, should one assume that a correction may be nearing? Our main consideration of the following charts of the S&P 500 is the duration of the turning points. In the next set of charts we took a historical “Top” and the October 2007 “Top” and indexed them to 100 so that we could compare the price action. In the above chart, notice the orange line formed a top about seven years from the September 2000 Top. It would appear that this seven year ‘top to top’ cycle is not that uncommon. Although the pattern after the 2007 correction and 1966 correction are not identical, the consistent seven year timeframe from peak to peak is important to note in the above chart. In the above chart the orange line (1909) does not climb nearly as high as the blue line (2007) after advancing to August 2014; however in 1909 (orange line) the United States was tied to a “Gold Standard”, likely resulting in less inflationary effects. The above chart is an average of the other indexes that illustrates a seven year top to top market formation. Of course it would be easy to find any data point that starts seven years prior to a historical top; the observation that we find fascinating is how actual market tops can regularly occur in seven year intervals.

The following charts are even more fascinating as they outline fourteen years of market action. Perhaps if the Gold Standard were still in effect in the United States, the current market action would mimic the 1902 market more closely. Either way, this example of seven year tops is fascinating, and the above charts may be a reasonable indication that a top may be nearing. However, we would like to note that there are always exceptions and nothing “has” to change one way or the other. It may also be possible that the stock market is at the start of spectacular new bull market that will last for many years to come. According to our research and market fundamentals, it is our opinion that a correction may be more likely.

At investmentscore.com we take a unique look at the market so that we can determine when to average into or out of bull markets. Through our custom built, Scoring and Timing Charts, we offer a one of a kind perspective on the markets.

Our contrarian views help us remain focused on locating undervalued assets based on major macro market moves. Instead of comparing a single market to a continuously moving currency, we directly compare multiple major markets to one another. We expect this direct market to market comparison will help us locate the beginning and end of major bull markets and thereby capitalize on the largest, most profitable trades. We pride ourselves on cutting through the “noise” of popular opinion, media hype, investing myths, standard over used analysis tools and other distractions and try to offer a unique, clear perspective for investing.

Our System for investing is simple and unique. We hope you join us and profit from what we believe is the current commodities mega bull market. To learn more or to sign up for our free newsletter please visit www.investmentscore.com.

To better understand our service and philosophies we recommend you read: