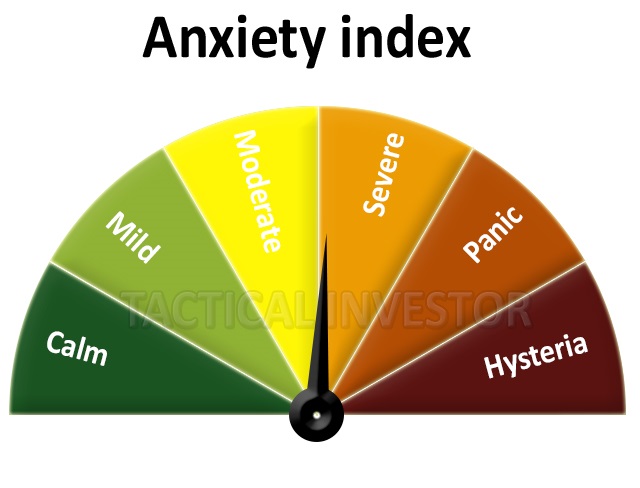 A man profits more by the sight of an idiot than by the orations of the learned.

We have one expert after another predicting that it is time for the markets to crash; mind you these same chaps sang this same terrible song of Gloom in 2015, 2016 and now they are singing it with the same passion in 2017. There is one noteworthy factor, though; a few former Bulls have joined the pack. Does this now mean that the markets are going to crash? Apparently not, well, at least if you look at the indices, as of Jan the market continues to trend higher. Furthermore, what is a crash or for that matter a pullback or a correction? Does it not all boil down to a perception? One individual could view it as a crash, while the other views it as a mild correction and an opportunity to purchase more shares. It would all depend on when you jumped into this market. If you embraced this bull market in 2016, then a pullback in the 10%-15% ranges would feel like a crash. On the other hand, if you embraced this beast (Stock Market Bull) anywhere from 2009-2011, it would seem like a mild orderly correction. Most experts almost gleefully try to force their twisted perceptions on everyone. Just because the experts decide to label it as a crash does not mean you should follow their lead; experts are known for getting it wrong all the time. In fact, experiments have shown that monkeys throwing darts at a random list of stocks fare much better than Wall Street experts. Hence, take their so-called sage advice with a barrel of salt.

If these experts were so astute, then why have most of them missed one of the biggest bull markets of all time. Moreover, now they want to convince you that it is time to short it after failing to embrace it. How can one trust these penguins? If they failed to identify the bull market in the first place, how is it they are suddenly able to predict the top.

Several weeks ago we penned an article (excerpt provided below) where we stated that caution was warranted as the markets should let out some steam, but as the trend was still up, we did not feel it was time to short the markets. All the experts that stated it was time to bail out and short the market must be smarting from their losses. The market loves to punish arrogant self-proclaimed know it all gurus. Mass psychology is very clear when it comes to the markets; the masses need to embrace the markets before one can claim a top is close at hand. The masses so far have refused to embrace this market for a prolonged period.

When you think about it, everything comes down to perception. Alter the angle of the observation slightly, and you modify the perception. What appears bullish to one could be viewed as an extremely bearish development by another. When it comes to investing the goal should be to determine what view the masses hold whether it is valid or not is irrelevant for the difference between a truth and deception comes down to perception also. If the masses are leaning strongly towards a particular outlook, history indicates that taking a contrary position usually pays off.

The masses have for the first time embraced this bull market. From a mass psychology perspective, this is alone is not a huge negative. Mass Psychology dictates that the masses need to turn euphoric before one abandons the ship. It is not the time to abandon ship, but it is time to take a breather and let the storm clouds pass. The Dow industrials exploded upwards and have experienced a near vertical move over the past two months. Under such conditions, one should not be shocked if the markets let out a stronger dose of steam than they have over the past 24 months. Tactical Investor

The crowd appeared to embrace this market initially, but just as fast as they embraced it, they pulled back as illustrated by one of our proprietary indicators. In Jan of this year, the gauge was in the middle of the Mild Zone, but as you can see as of the last reading, the gauge has just dipped into the “severe” zone. Given the current trajectory, we expect the needle to move deeply into the “severe” area in the very near future. Instead of pulling back the markets have continued to trend higher, and at this stage of the game, patience is called for. Ideally, the markets will let out a large dose of steam, but markets do not usually cater to your needs; barring a substantial pullback a nice consolidation would suffice. Market consolidations drive key technical indicators into the oversold ranges and allow the market to build up steam for the next upward leg. This rapid change in Crowd sentiment validates what we have stated all along last year that the final part of this ride is going to be extremely volatile. It also confirms that all sharp pullbacks have to be viewed through a bullish lens, regardless of the intensity, until the trend changes. The trend is still up, and the masses are far from euphoric. Let’s not forget that Trump continues to inject a massive dose of uncertainty into the markets. When it comes to the markets, uncertainty is a bullish factor, for it means volatility is going to soar and volatility is a trader’s best friend.

The markets could crash in 2017, but they could have crashed in 2016 and or 2015; could have, would have, should have are pathetic arguments put forward by individuals who thrive on fear. When it comes to the markets fear is the most useless emotion one can possess, for it yields no positive result. One day the markets will crash but as of today the bandwagon is not buckling under its weight, and the masses are not euphoric. In fact, the crowd is getting anxious because they do not know what to expect. Markets climb a wall of worry and plunge over a slope of Joy.

Given that this market has experienced such a massive run up, it goes without saying that it needs to experience one relatively sharp correction; ideally, this correction would fall in the 15%-20% ranges. Yeah, we know, now all the bears will rush out and scream “we told you so”. Our response to these agents of misery would be “go crawl back under the rock you came from”. Just look how far the markets have rallied since their 2009 lows; to view a 15-20% pullback as the end of the world is an act of insanity.

Every strong bull market has to experience one adamant correction, and we do not think this market is going to be an exception. This pullback will be followed by an even more powerful rally, and towards the tail end of this rally, the masses will embrace this market with gusto. Sentiment readings will soar, and everyone will be dancing up and down in Joy, and that is when the hammer will fall bringing an end to this bull market and triggering the first phase of a stock market crash. For now, caution is warranted, but shorting this market is not something the prudent investor should consider; at least not until the stock market experiences a trend change. Ideally, the market will shed a large dose of steam or consolidate sideways for several weeks before attempting to test the 20,800-21,000 ranges.

People deal too much with the negative, with what is wrong. Why not try and see positive things, to just touch those things and make them bloom?