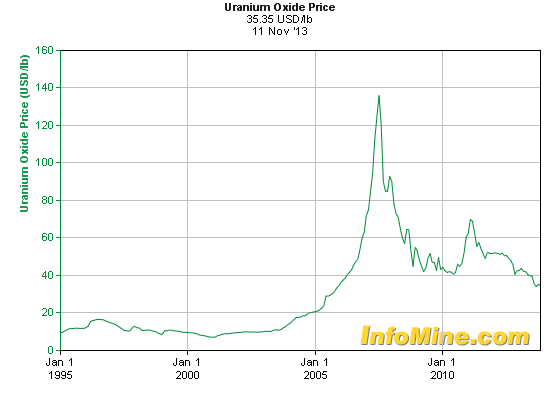 Uranium prices have been on a downward slide for half a decade now.

Trading around $35 per pound, uranium simply can’t stay this low for much longer.

The last uranium boom kicked off in 2005 as part of the “commodity supercycle.” Commodities were already in an upward trend. But something special happened to uranium…

A new uranium mine called Cigar Lake was supposed to come online in 2007. It is the largest undeveloped high-grade uranium mine in the world.

However, Cigar Lake didn’t come online. Instead, it experienced a major flood.

With the world expecting this new source of uranium supply, prices started spiking quickly — all the way up to $138 per pound — before the popping of the housing bubble and the financial crash brought them back down. The incident at Fukushima helped keep them low.

Now things are starting to change…

The stage is set for a new uranium boom.

Why Uranium, Why Now?

At the very basic level, there simply isn’t enough supply to meet demand.

Some of the difference is made up with reprocessed fuel, but a supply crunch still looms for a litany of reasons.

For starters, global electricity demand is growing twice as fast as overall energy demand. Worldwide demand for electricity will rise 75% by 2035.

Nuclear is the cleanest (no emissions) and safest (per kWh generated) than any other fuel source. It will be the go-to source for the world to provide clean baseload energy.

Even Japan is not shying away, with Prime Minister Abe calling those who want to end nuclear power in Japan “irresponsible.”

There are nearly 70 reactors under construction worldwide, more than 160 planned, and 315 proposed… According to Rockstone Research:

A supply shortage is anticipated post-2013/2014: primary supply capacity must increase by around 90 million lbs. U3O8 in the next 6 years until 2020 only to meet demand requirements. During the last 8 years (2003-2011), global mine output solely increased by 48 million lbs…

For output to increase to meet rising future demand, uranium prices have to rise. Lastly, some 20 million pounds of uranium per year have been coming to the United States from Russia for the past 20 years.

For reasons I lay out here, this agreement will soon come to an abrupt end, leaving a wide gap in U.S. uranium supply.

With uranium prices slated to rise some 85% in the coming two years, what’s the best way to play it?

Uranium Investing in 2014 and Beyond

There’s a reason uranium miners like Cameco (NYSE: CCJ), Denison (AMEX: DNN), and Areva (PA: AREVA) are outperforming the market twice over (or more) since mid-October:

This is only a sign of things to come.

Increasingly, one region is being looked to as a large supplier of future uranium. Currently, the Athabasca Basin provides 16% of global uranium production. This is second only to Kazakhstan.

Over the next few years, though, Athabasca will be the fastest-growing area for uranium production in the word. Its output is expected to double by 2020. This is and will continue to happen for many reasons:

For these reasons (and more, which I outline here), Athabasca is about to become the world’s uranium hotspot.

There’s already a land rush on…

A bidding war between Cameco and Rio Tinto (NYSE: RIO) for Hathor’s Roughrider deposit ended at $642 million in early 2012. Denison paid $71 million to Fission Energy for a portfolio of projects in the area earlier this year. It’s also made a $26 million offer to take out Rockgate Capital (TSX: RGT). Areva owns 37% of Cigar Lake, 30% of McArthur River, and the majority of the Midwest Mine. This uranium grab is only getting started. The western and northern portions of the basin are only now being explored, and they look very impressive.

The tiny exploration companies that own them will grow by giant multiples as uranium price start their climb toward $70 per pound.

I have my eye on two of them specifically — and I went to visit them a few weeks ago, more than 2,500 miles from Baltimore.

So you can get ahead of the crowd on this one, I’ve put together a video detailing all the reasons for the coming uranium rush, my tour of the western Athabasca Basin, and why these two companies are poised for the highest gains.

Nick is the Founder and President of the Outsider Club, and the Investment Director of the thousands-strong stock advisory, Early Advantage. Co-author of two best-selling investment books, including Energy Investing for Dummies, his insights have been shared on news programs and in magazines and newspapers around the world. For more on Nick, take a look at his editor’spage.