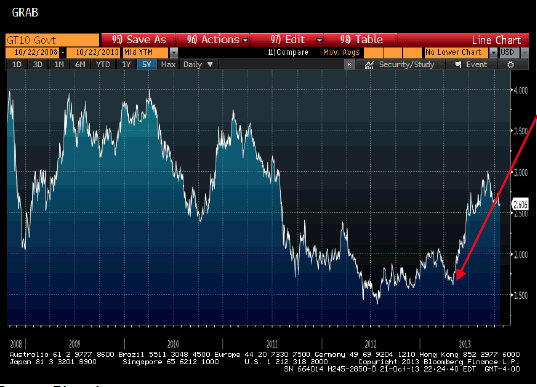 The above headline from the New York Times wins the award for Understatement of the Year. “May” weigh on the Fed’s decision? The September unemployment report1, released Tuesday by the Bureau of Labor Statistics was a disappointment. Though 148,000 jobs were added and the unemployment rate ticked down to 7.2%, the consensus add was for 185,000 net new jobs. The unemployment rate fell due to citizens leaving the labor force, which kept a lid on the labor force participation rate at 63.2% – still at its lowest since 1978.

Perhaps more ominous, the data used in this employment report was collected BEFORE the recent shutdown of the US government. This will no doubt weigh on the fourth quarter economic statistics yet to come.

Though manufacturing data demonstrates evidence of a growing industrial base, other metrics including new home sales and CPI show evidence of an economy struggling to live up to its potential. If increasing bond yields (see the US 10 year bond below) and commodity prices are true harbingers of inflation, we can surmise that inflationary expectations are well contained in the US. In short, the Federal Reserve’s attempts to reflate the US economy through multiple rounds of QE, Operation Twist, etc. haven’t worked. The “head fake” Chairman Bernanke gave the markets in September when tapering was postponed, gave emerging markets like India another chance to prepare their economies for the possibility of tapering asset purchases in 2014.