“Sorry, No Gold Today… We Sent It to China” 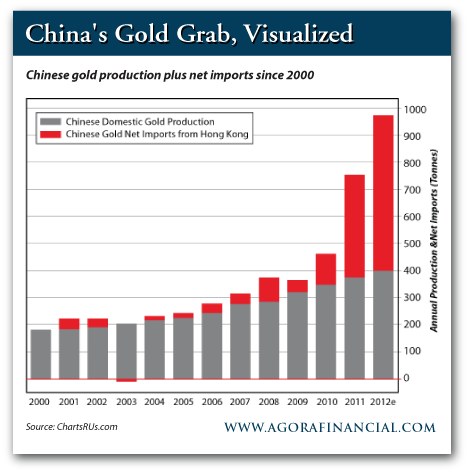 “The central banks’ gold is likely gone, and the bullion banks that sold it have no realistic chance of getting it back” Eric Sprott tells us.

He also says that these “bullion bank” intermediaries are probably turning around and selling their gold to China.

China, by the way, is the mostly likely catalyst to set off the “zero hour” scenario we told you about on Friday…

We’ve chronicled China’s ongoing gold grab here at Agora Financial — going all the way back to April 24, 2009, when the People’s Bank of China announced its gold reserves had grown to 1,054 tonnes — up from 600 in 2003. And that’s the last official word.

Then there’s private-sector demand in China. The government is equally opaque on this score. But we do get regular figures on Chinese imports via Hong Kong. Last year, they totaled a staggering 834.5 tonnes. And remember, that’s in a market that produces only 3,700 tonnes a year!

Couple those imports with Chinese mine production — and the total amount of gold known to be inside China has doubled in a mere three years. Echoing a theme we first wrote about in The Demise of the Dollar (John Wiley & Sons, 2005), “suppressing the price of gold,” the article went on, “is very beneficial for the U.S. in maintaining the U.S. dollar’s role as the international reserve currency. China’s increased gold reserves will thus act as a model and lead other countries toward reserving more gold. Large gold reserves are also beneficial in promoting the internationalization of the renminbi.”

The plot thickens: “In 2009,” says our own Outstanding Investments editor Byron King, “a high-ranking government adviser let slip that a special government task force recommended increasing China’s gold reserves to a staggering 10,000 tonnes.” What’s more, “word is already starting to leak out in Chinese newspapers that government officials intend to make the renminbi ‘fully convertible’ by 2015” — that is, able to be freely exchanged for other currencies.

Put it all together and the picture becomes clear: China aims to grow its gold stash tenfold to bolster the renminbi’s credibility in only two more years.

We come back to Mr. Sprott’s question: “So where’s the gold coming from?”

In January, Germany’s central bank posed the same question. It made plans to repatriate much of its gold stash — heretofore kept in France and America, the better to keep it out of the Soviets’ hands in case the Cold War ever turned hot.

The process of moving 674 tonnes back to Germany is scheduled to take… seven years.

Not the sort of time frame that should make you feel warm and fuzzy about how much of the U.S. and French reserves are actual gold — or “gold receivables.”

Which brings us back to zero hour in the gold market. On any given day, the amount of physical gold that’s traded around the world is dwarfed by “paper gold” — mostly futures. In the estimation of experts like our friend Egon von Greyerz of Gold Switzerland and Hong Kong-based hedge fund manager William Kaye, the ratio is 100-to-1.

Up until now, the ratio has posed no problem. Most people trading gold futures are in it for a short-term gain. But a few people always want to take delivery of actual metal. At zero hour, “what happens is someday some guy or country wants to buy gold, and it’s not going to be available,” says Eric Sprott.

The Comex can’t deliver… and offers up a cash settlement instead.

“When does the last bar disappear and somebody fess up? We trade all this paper gold, but we now know there’s nothing behind it, because you can’t get delivery.” The timing is impossible to pinpoint… but “we’re living sort of hand to mouth already,” Sprott warns. “So it could be quite imminent.”

When the day arrives, you don’t want to be holding paper gold — and that includes exchange-traded funds like GLD. As we’ve pointed out before, the ETFs are subject to “counterparty risk” — the risk that whomever you’re doing business with won’t, or can’t, live up to their promises. Just like futures.

When zero hour comes, GLD’s price will do what it’s always done — track the Comex price of gold. Meanwhile, real physical gold in your possession will break away from that price… and you’ll be glad you have it.

As the old commercial said, “Accept no substitutes.” Own physical gold.

Addison Wiggin is the executive publisher of Agora Financial, LLC, a fiercely independent economic forecasting and financial research firm. He’s the creator and editorial director of Agora Financial’s daily 5 Min. Forecast and editorial director of The Daily Reckoning. Wiggin is the founder of Agora Entertainment, executive producer and co-writer of I.O.U.S.A., which was nominated for the Grand Jury Prize at the 2008 Sundance Film Festival, the 2009 Critics Choice Award for Best Documentary Feature, and was also shortlisted for a 2009 Academy Award. He is the author of the companion book of the film I.O.U.S.A.and his second edition of The Demise of the Dollar… and Why it’s Even Better for Your Investments was just fully revised and updated. Wiggin is a three-time New York Times best-selling author whose work has been recognized by The New York Times Magazine, The Economist, Worth, The New York Times, The Washington Post as well as major network news programs. He also co-authored international bestsellers Financial Reckoning Day and Empire of Debt with Bill Bonner.