Something Changed in the Silver Market in May: Here Are 3 Reasons Why 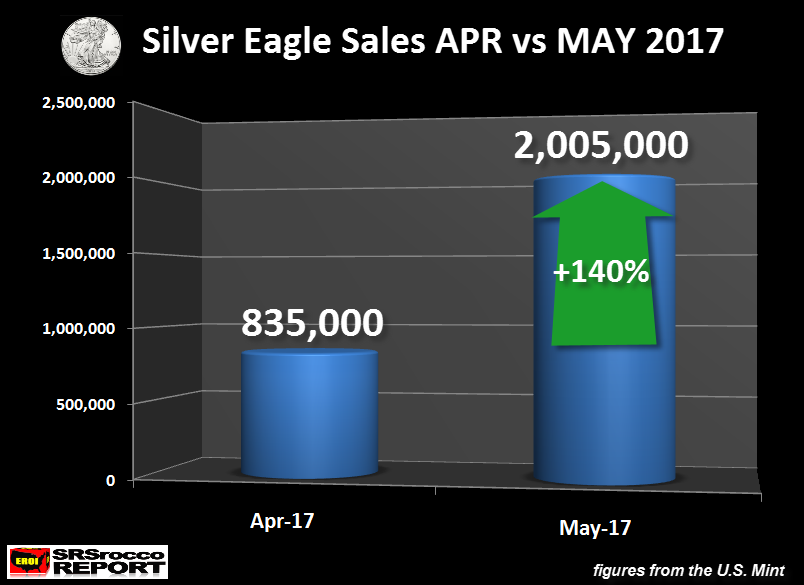 Something changed in the silver market in May as U.S. Silver Eagle sales have surged compared to the previous month.  This is quite interesting as precious metals sales and sentiment have declined in the West, especially in the United States, ever since Donald Trump was elected President.

Many precious metals investors thought that if Trump was elected, it would have been very positive for the gold and silver market.  Unfortunately, it seems as if the opposite was (is) the case.  Not only has demand for precious metals declined considerably in 2017 versus last year, so has sales of guns, ammo and survival food-supplies.  I gather many of those who follow the alternative media believe Trump is actually going to make America Great Again.  So, why protect oneself from a collapse?

This is a very bad assumption… as nothing has changed with Trump in the White House.  Furthermore, many analysts are saying that what Trump is doing could actually speed up the collapse of the U.S. economy and financial system.

Regardless, the fundamentals in the U.S. economy continue to disintegrate.  We are seeing economic bubble indicators reach or surpass what took place in 2007, before the bloodbath hit the U.S. Housing and Financial Markets.  However, there is one additional negative factor that wasn’t a problem in 2007 that is now a BLINKING RED LIGHT.

What is this new lousy fundamental?  It’s the U.S. and Global Oil Industry.  Back in 2007, most of the oil and gas companies were making decent cash flow and profits.  Unfortunately, the situation in the Oil Sector is orders of magnitude much worse than what is was in 2007.  Not only are the majority of oil and gas companies losing money, they have been also cutting their oil reserves.

This is extremely bad news for which very few Americans are aware.  Thus, we are now facing an extremely negative DOUBLE-EDGE SWORD of bubble economic indicators on top of a disintegrating oil industry.  Which means… the situation today is much worse than what took place back during the 2008 Global meltdown.

U.S. Silver Eagle Sales Surge In May Due To 3 Reasons

U.S. Silver Eagle sales surged 140% in May versus April… and we still have another week remaining in the month.  According to the recent update by the U.S. Mint, Silver Eagle sales reached 2,005,000 so far in May compared to 835,000 in April:

After seeing this spike in Silver Eagle demand, I called up a few of my contacts in the industry and asked if they could shed some light as to why sales jumped in May.  According to several sources, they stated that the huge increase in Silver Eagle sales were due to three reasons:

These three reasons stated by my contacts, are what has likely driven demand for Silver Eagles to the highest level seen so far this year… if we exclude sales in January, which are always elevated as wholesalers are stocking up on the debut of the new coin release.

It seems as if a large buyer in the Northeast believes silver is a good deal at this price.  Furthermore, when the wholesalers lowered the premiums (lowest in seven years), there was an immediate surge in Silver Eagle buying via small retail investors which caused the premium to increase once again.  Also, the silver market underestimates the reaction when certain Technical Analysts put out a BUY SIGNAL.  Many individuals who follow or subscribe to these analysts, are big investors.  So, when they see a buy signal… they do so in a BIG WAY.

That being said, I would like to remind those reading this article (that might be new to the precious metals industry) please make sure you understand the difference between “PREMIUM” and “COMMISSION” when you decide to purchase precious metals.  There are a group of very widely advertised precious metals dealers that may have lowered their premium along with the other dealers, but still charge very high commissions for their products or services.

IMPORTANT NOTE:  The PREMIUM is what the dealer pays the wholesaler for the coin or bar.  The COMMISSION is what the dealer charges his client above the premium.  You need to ask what the commission you are being charged as many new investors are being taken advantage of… but don’t realize it until later, when it is too late.

While two million Silver Eagle sales so far in May are less than they were last year (4,498,500), this surge in demand suggests that the hype surrounding a Trump Presidency may be fading… and quickly.  If we take a look at Silver Eagle sales from FEB to MAY, we can clearly see that something has changed recently:

If the strong demand trend continues for the remainder of May, we could see Silver Eagle Sales reach 2.5-2.8 million.  Again, this is lower than what it was last year, but it is a sign that market is starting to SMELL A RAT.  And that RAT is a totally inflated STOCK, BOND & REAL ESTATE MARKET.

Lastly, for those precious metals investors who are frustrated by the disappointing paper Gold and Silver price performance since 2012, the STOCK, BOND and REAL ESTATE markets have never been in such BUBBLE TERRITORY.   For some odd reason, many precious metals investors tend to overlook the $7 trillion in Central Bank assets purchases (that were made public… could be much higher) from 2011-2016, and the whopping $1 trillion purchased in just the first four months of 2017.

It seems as if many Americans are suffering from BRAIN DAMAGE as the MainStream Media continues to put out the most misinformation and propaganda in history.  This causes individuals to lose the ability to think CRITICALLY.  And with that will come a great deal of pain and misfortune when we finally see the collapse value of most STOCK, BOND and REAL ESTATE prices.