Something Big Is About To Happen With Gold And Silver 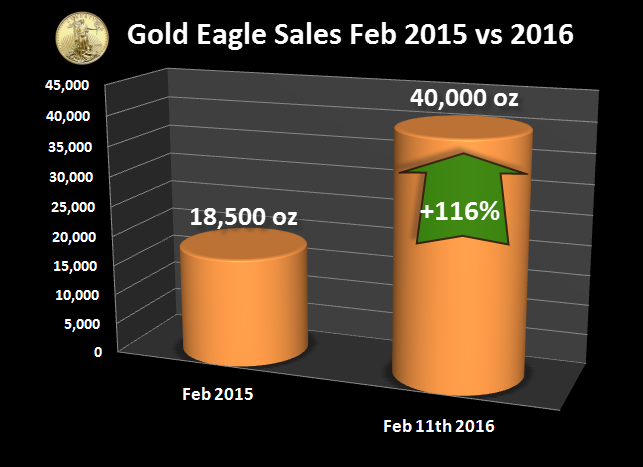 The markets have finally cracked and things are about to become a lot more interesting.  Today, the price of gold surged more than $60 and silver $0.60 as the markets crumbled.  Even though the markets recovered after some TWO-BIT announcement by OPEC stating that they were talking about “Cutting Production” again… I believe the worst is yet to come.

It has been quite some time since the gold priced shot up more than 5% in one day.  As I stated in past articles and interviews, we will continue to see a lot more days like today.

The huge spike in the price of gold sparked a surge in demand.  According to the Zerohedge article, Lines Around The Block To Buy Gold In London; Banks Placing “Unusually Large Orders For Physical“:

BullionByPost, Britain’s biggest online gold dealer, said it has already taken record-day sales of £5.6m as traders pile into gold following fears the world is on the brink of another financial crisis.

BullionByPost, which takes orders of up to £25,000 on the website but takes higher amounts over the phone, explained it had received a few hundred orders overnight and frantic numbers of phone calls this morning.

“The bullion market has been building with interest since the end of last year but this morning things have gone bananas,” said Mr Halliday-Stein. “Some London banks are placing unusually large orders for physical gold.”

London-based ATS Bullion added it had been inundated with orders for the past week. The firm has sold 4,000 gold bars and coins since February 1, a 40pc rise on the same period a year ago when it sold 1,500.

Again, I believe this is just the beginning of what will become an AVALANCHE of physical gold and silver buying.  Right now there is only a hint of fear.  Wait until the markets really start to tank as the price of oil heads below $20.

While demand for gold in Europe has spiked today, Gold Eagle sales surged this week and are already 116% higher than last year February sales: Silver Eagle sales are also quite robust.  Total sales of Silver Eagles (Jan-Feb) are now 8 million versus 8.5 million sold last year.  However, we must remember, the U.S. Mint has put a weekly allocation of only 1 million per week.  So, sales could not be any higher than 8 million.

If the U.S. Mint keeps the weekly allocation the same, while demand remains strong, we can see a total of 10.5+ million oz sold in the first two months of 2016.  This would be nearly 25% more than last year.

Last year, I kept track of the elevated level of U.S. silver imports.  After the spike in silver retail investment demand began to wind down in October and November, U.S. silver imports also declined.  However, something changed in December: U.S. silver imports jumped by more than 33% in December versus November. Matter-a-fact, the 557 metric tons (mt) of total U.S. silver imports were the second highest monthly in 2015.  If we look at the data for the entire year, the U.S. imported nearly 1,000 mt more silver than it did in 2014: I believe there continues to be large entities acquiring silver off the radar.  Moreover, the silver didn’t go into the Comex inventories as stocks continued to decline in December.

Something Big Is About To Happen In Gold & Silver

It seems as if the markets finally cracked today.  While the clowns and nitwits at the Fed and on the Financial Networks continue to regurgitate that “Everything is okay”, the markets are about to take another huge noise-dive lower.

Fear is starting to enter back into the psyche of the investor.  All it would take would be the bankruptcy of a financial institution such as Deutsche Bank to push the whole thing over the cliff.  When Deutsche Bank finally goes belly up, we will see an avalanche of physical gold and silver buying.  Analyst Jim Willie believes the collapse of Deutsche Bank will be Lehman Brothers TIMES 5.

Already we are see panic buying of gold in Europe and things haven’t really gotten all that bad yet.  At some point, the situation in the markets will become so dire… available supply of the precious metals will simply dry up.

So, you wealthy investors out there who still have your net worth tied up into paper assets… you better wake up and start buying physical gold and silver before it’s too late.

Please check back for new articles and updates at the SRSrocco Report.  You can also follow us at Twitter below: