Something BIG Is About To Happen To Silver 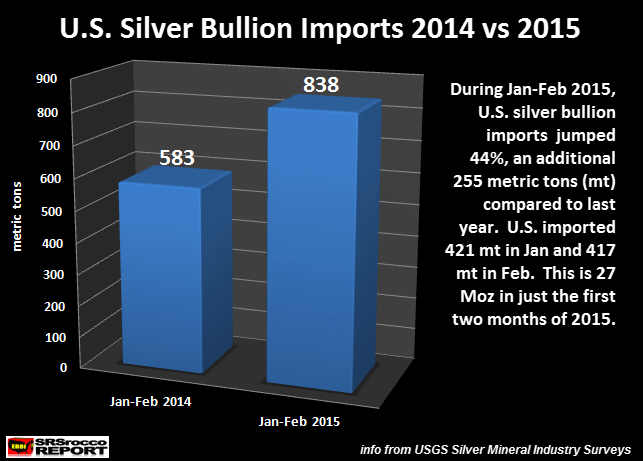 Yes, that’s correct. Something BIG is about to happen to silver.  Now, how this plays out is hard to tell.  Recently released new data points to a situation that will force a BIG move in the silver market.  In addition, there have been some very interesting movements in the flow of silver bullion.

As I mentioned in the article Why Is The U.S. Importing So Much Silver Bullion??,  U.S. silver bullion imports surged 44% in the first months of 2015 compared to the same period last year.  We can see this in the chart below: During Jan-Feb 2015, the U.S. imported 838 metric tons (mt) of silver bullion versus 583 mt last year.  Moreover, I mentioned that overall demand for silver in the first quarter of 2015 is either flat or down compared to last year.  So, why would the U.S. silver market need additional silver bullion if demand is lower?  Who is acquiring this silver… and why?

This brings me to the newest data put out by the CFTC.  According to the most recent COT Report, the Commercials (big bullion banks) added a massive 18,595 new silver short contracts in just the last week.  This is off the charts.  If we look at the chart below, we can see just how big this single week increase compares to the changes over the past year: The RED LINE in the chart below the silver price chart is the change in Commercial net short positions.  You will notice that most of the changes in the past were more subtle. The Red Line changes in a stair step pattern, either up or down.  The majority of the times, the step changes are very gradual.  However, this past week was a huge step down of a net short position of 24,362 contracts. So, if we go back all the way to 2011 when silver traded at its record high of $49, the Commercial net shorts weren’t as large as they are today.  For some reason, the Commercials were motivated to add the most short positions in one week for more than four years running.

We also must remember that when the Commercials reduce their long contracts; it acts as an increase to their net short position.  That being said, over the past four years the Commercials never added as many short contracts in one week as they did last week.

What does this all mean?  Well, if we go by the trend for the past several years, the Commercials are betting that the price of silver is heading lower.  How much lower??  Who knows, but the Commercials now have the most net short leverage since their last record net short position on Jan 22nd, when the price went from a high of $18.49 to a low of $15.26, just two months later.

Could Silver Skyrocket Higher On A Massive Short Squeeze?

This is the forecast put forth by Bo Polny of Gold2020Forecast.com.  I have spoken with Bo on the phone several times and he has his own method in determining the movement in the precious metals.  He sent me this chart showing how the four-year descending triangle for silver was finally broke on May 18th. Bo believes the price of gold and silver will breakout before the summer, June 21, 2015.  So, there you have it.  The Commercials have placed their bets looking for the price of silver to move lower, while Bo believes we are going to see a massive short covering rally due to silver breaking out of the four year descending triangle.

With the possibility of Greece exiting the EURO, the situation in the global financial system could become very interesting.  There is a good chance the Greek exit could happen quickly.  Thus, a BIG move higher in the precious metals prices could possibly be the result.  Let’s see how the next month plays out.

As you all know, I am more of a long-term fundamental investor in the precious metals. I believe the peak and decline of global oil production will wreak havoc on the valuations of most paper assets.  Owning precious metals during this time will be one of the best investments or stores of wealth.  There is no limit to how high the value of gold and silver could reach as the Greatest Paper Ponzi Scheme in history collapses.

Nonetheless, we are going to see a great deal of volatility along the way.  Something strange is going on in the silver market that I can’t put my finger on.  There is no reason the U.S. should be importing a record amount of silver bullion as Silver Eagle sales are flat year-over-year, industrial silver consumption is likely lower, and the COMEX silver inventories didn’t really increase that much during the first quarter of 2015.

This makes the huge increase in the Commercial Net Short quite interesting. Something BIG is about to happen to silver.  The real question is… WHICH WAY WILL IT GO?

Please check back for new articles and updates at the SRSrocco Report.  You can also follow us at Twitter below: