Something Big Happened In The Gold Market 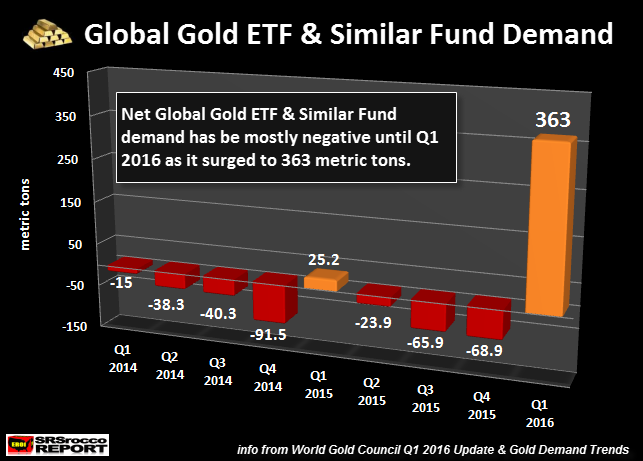 Something big happened in the gold market.  It was a stunning trend change in mainstream gold demand during the first quarter of the year.  This suggests investors are becoming increasingly worried about the stock markets and are looking for safety elsewhere.

Over the past several years, the gold market has suffered net outflows of metal from Gold ETF’s & Funds.  However, this changed in a big way in Q1 2016: According to the World Gold Council’s Gold Demand Trends, the market suffered net outflows from Gold ETF’s & Similar Funds except for the small 25 metric ton (mt) build during Q1 2015.   Then in the first quarter of 2016, it surged to 363 mt.  Actually, it was the second highest quarterly build of Gold ETF’s & Funds in history.

Well, there was a good reason for mainstream investors to pile into gold during this time.  This was when CNBC’s Jim Cramer was telling his viewers that there was no bottom in sight as the Dow touched 6,700.  Financial network talking heads just didn’t know what to say anymore as they watched what looked like a total collapse of the markets.

However, this present surge of the mainstream investor into the gold market is quite interesting as it took place when the Dow Jones was only down 15% from its highs.  I discuss this in detail in my new report, THE GOLD REPORT: Investment Flows.

If you haven’t yet read the report, I highly recommend it.  It shows how the ongoing trends in the gold markets point to a huge move in the future. Looks Like The Gold Bear Market May Be Finally Over

The World Gold Council put out a quick Q1 2016 gold update in which, they included the following table: As we can see in the chart, the average bear market experienced a -44% correction.  The most recent gold bear market (9/11 – 12/15) suffered a -44.1% correction.  Currently, gold is up 17% in the first quarter of the year.  This huge rally and surge of mainstream investors into Gold ETF’s & Funds took place as the Dow Jones fell 2,000 points.

Even though the Dow Jones Index has recovered (and could still gravitate a bit higher) since its low in February, the continued crash of the broader stock markets will eventually take place.  If mainstream investors flocked into Gold ETF’s & Funds when the market only suffered a 11% correction (Jan-Feb), what happens when the markets really tank??

Furthermore, it is impossible to know if the Gold ETF’s such as the SPDR GLD Shares ETF have all the gold they report to have in their inventories.  Some precious metals analysts and investors believe these GLD ETF’s were designed to siphon mainstream investor funds away from physical gold and into paper gold shares. The theory is that investors who buy paper shares of gold keeps them from buying in the physical market.  Thus, removing more stress and possible tightness on the physical gold market

Investors need to realize the propping up of the broader Bond and Stock markets by the Fed and Central Banks won’t last forever.  If the huge surge of the mainstream investor into Gold ETF’s & Funds is a sign of things to come… get ready for things to get really interesting for the remainder of the year and into 2017.

Please check back for new articles and updates at the SRSrocco Report.