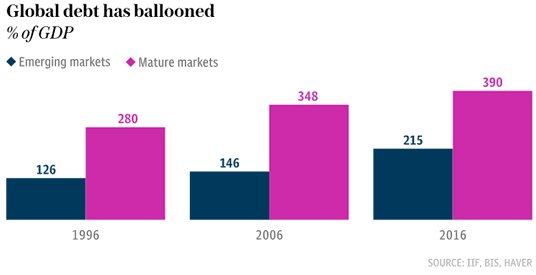 The UK’s Telegraph just published an analysis of global debt that pretty much sums up the coming crisis. Here’s an excerpt with a couple of the more hair-raising charts:

Global debt has climbed at an “eye-watering” pace over the past decade, soaring to a fresh high of £170 trillion last year, according to the Institute of International Finance (IIF).

The IIF said total debt levels, including household, government and corporate debt, climbed by more than $70 trillion over the last 10 years to a record high of $215 trillion (£173 trillion) in 2016 – or the equivalent of 325pc of global gross domestic product (GDP). It said emerging markets posed “a growing source of concern” to financial stability and the global economy as debt burdens in these countries climb at a rapid pace.

Growing vulnerabilities
The IIF data showed the increase was partly driven by a “spectacular rise” in emerging markets, where total debt stood at $55 trillion at the end of 2016, or 215pc of total emerging market GDP.

The body, which represents the world’s top financial institutions, said a wave of maturing debt this year presented a “growing refinancing risk”.

It estimates that more than $1.1 trillion of emerging market bonds and loans will mature this year, with dollar-denominated debt accounting for a fifth of all redemptions.

The Bank of England’s Financial Policy Committee (FPC) said on Tuesday that credit in China continued to grow at a “rapid” pace.

Corporate credit in the world’s second largest economy has climbed to 166pc of nominal GDP.

The IMF at the end of last year warned of broader risks to the global economy.

While the global economy appears to be turning a corner, the Fund said there was a risk that low growth, high debt and weak banks could push the world in a dangerous direction.

It said the “sheer size of debt could set the stage for an unprecedented private deleveraging process that could thwart the fragile economic recovery”.

Governments lead advanced economy debt rise
The increase in debt in advanced economies has been led by rising public sector debt, according to the IIF.

Outstanding government debt in the US and UK has more than doubled since 2006, data shows, while Japan and the eurozone have seen a 50pc increase.

These numbers are astounding. Emerging market debt was $7.4 trillion in 1996, and today it’s $55 trillion. US and UK government debt has doubled – from already historically-high levels — since 2006.

And there’s no end in sight. Japan just passed a record-high government budget, 35% of which will be borrowed. The US added $1.3 trillion to its federal debt in 2016 and is debating massive increases in defense and infrastructure spending. China’s corporate debt alone exceeds 170% of GDP.

Which leads to three inescapable conclusions:

1) Interest rates can never rise because rolling over this much debt at historically-normal rates would blow up the budgets of both the developed and developing worlds.

2) The only solution – if you can call it that – is massive currency devaluation to make these debts manageable.

3) Since the debt binge has apparently gone parabolic, the reckoning is fairly close at hand. 2018 might be one for the history books.