So What Was the ECM September 2014 Turning Point? 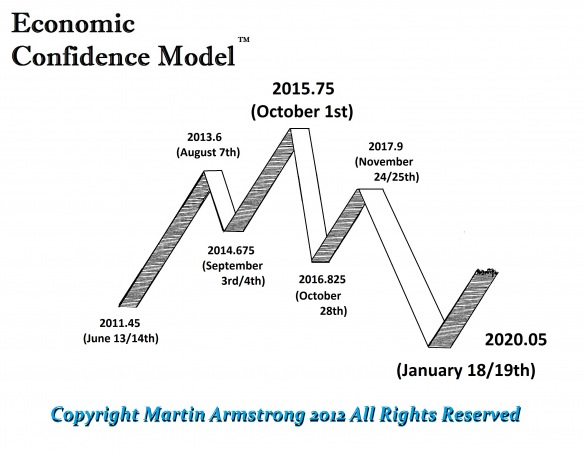 The 2014.675 turning point in the Economic Confidence Model seems to have pinpoint the shift in capital flows. The US dollar is rising and this may yet move into a serious rally that will have the politicians in turmoil have some even talking about protectionism again since morons never learn a lesson. You have to understand that a rally in the dollar isNECESSARY to turn down the economy for 2016-2020. The US economy is the ONLYthing hold up the entire world economy as it stands right now. Economic growth is becoming extinct in Europe, Russia, China, Japan, the Bricks, you name it. Let the first shot be fired between China and Japan and

watch how much dollar buying its in a single day.

The amount of dollar haters out there is staggering. They just cannot see that the US debt of $17 trillion is not a negative – it is a positive when there is $30 trillion in central bank reserves and country wealth funds. There are NOT ENOUGH dollars to go around when there is no other place to stuff your money. This is a global problem that Europe has decided to inflict upon the world with its brain-dead idea of trying to create a single currency without a single governmednt. OOPS – too late now. Confidence has been lost thanks to France. France’s dream of competing with the USA and surpassing it – well Hollande wiped that dream from the slate – as the Italians would say – Arrivederci Francia. Even gold has fallen for two weeks since the turn in the ECM. Gold’s Benchmark was 9/15 and that producing a low warns indeed we will see lower prices ahead. The second part to the metals report is Silver. This covers silver in all the major currencies, the silver/gold ratio, and the conclusion for the targets in time and price with respect to gold and silver. The third part is Platinum, Palladium, and Copper. The gold promoters just can’t get it through their head, sometimes there are bigger issues to consider like the global economy and where do the metals really fit in. The Euro is trading at the 127 level and it is sinking rapidly. We have critical support at the 122-123 level and a weekly closing below 122.44 will warn we have serious problems ahead for Europe. The Monthly Bearish Reversal lies at 125.52 and is September closes below this level, watch-out for November. Even a monthly closing BELOW 129.78 will be a sell-signal for Europe.

Dean Martin’s Arrivederci Roma may take on the status of a theme song for Europe pretty soon. This is what we get letting lawyers with ego problems run governments when they are obviously highly questionable to have practiced law to start with. We need REALpeople to grab a hold of this mess before it is way too late or perhaps Eric Clapton’s –Good Night Irene might be next to the final song we sing – Don McLean’s – American Pie.

Plight of Germany – Down For the Count?

Canada Warns its Citizens Not to Take Cash to USA