Silver’s Significant Underperformance and Its Implications 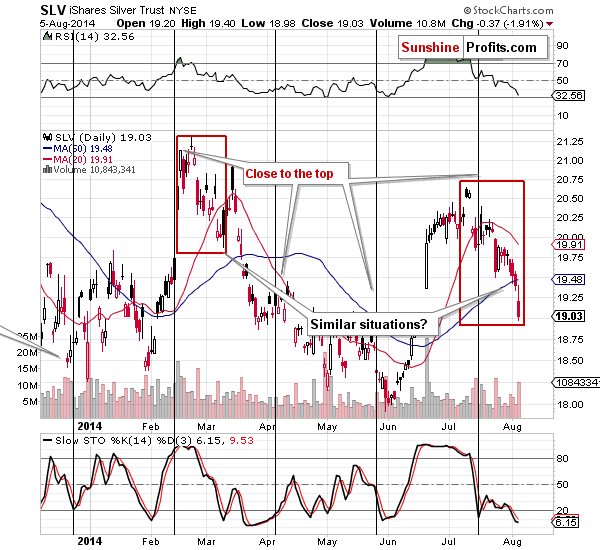 Briefly: In our opinion no speculative positions in gold, silver and mining stocks are now justified from the risk/reward perspective.

Yesterday’s price action in the precious metals market was very specific. Gold declined very little, silver declined much more, and mining stocks moved a bit higher. When we see a mirror image of such action (gold pauses, silver rallies and miners decline a bit), it’s usually a sign of a top. Have we just seen a local bottom? Let’s take a look at the charts (charts courtesy of http://stockcharts.com), starting with silver. In short, the self-similar pattern remains in place. At this time the pattern is proportionately bigger, but remains similar in terms of shape. Big declines in the precious metals sector have been very often preceded by silver’s short-term outperformance, even if this outperformance was preceded by a visible downswing in the price of the white metal. What we saw in February and March serves as a perfect example.

Why has silver underperformed recently? As always, there is no clear explanation behind any price move (other than because someone pushed the “sell” button), but it seems to us that it can be in a large part attributed to the sharp decline in the general stock market.

If we are just seeing the beginning of another huge decline, then we are still quite likely to see a sharp rally in silver, just before the big drop. In other words, what we have written about the silver market previously remains up-to-date:

The current situation is similar to what we saw in March. Silver declined after a local top was formed close to the turning point, then bounced a bit and then it moved a bit below the previous low. Back in March it rallied for a few days only to disappoint and plunge shortly thereafter. This scenario seems quite probable at this time, not only because of the similarity on the above SLV ETF chart but also because of the situation in the currency markets. Turning to the yellow metal, we see no new low. Gold has basically remained where it closed on Monday, which is a sign of strength, given that the USD Index moved a bit above its previous high. Overall, what we wrote yesterday remains up-to-date:

The trend is down for both the short and medium term, but since gold has not declined as much as it “should” based on the dollar’s rally, it still seems likely that a correction is just around the corner. Mining stocks remain above the declining support line, which means that the situation in this part of the precious metals sector hasn’t changed much. Actually, the situation improved a little, because miners could have declined based on Friday’s big intra-day reversal – and they didn’t. With this negative factor out of the way, we are left with the support line as a bullish factor.

All in all, the situation is unclear for mining stocks – but with a bullish bias. As mentioned previously, the USD Index moved higher once again, but it seems that the index will at least take a breather soon. The dollar is right after its cyclical turning point, which makes a pullback likely even without the overbought status, and the USD Index is definitely overbought in the short term (note the reading on the RSI indicator in the upper part of the chart).

Moreover, individual USD-related currency pairs are reaching their respective support and resistance levels, thus suggesting that a turnaround or a pause is becoming more and more likely, even if it is not seen in a day or two.

Taking all the above into account, we can summarize the current outlook in the same way as we did yesterday.

Summing up, it seems that even though the next big move in the precious metals sector is still likely to be to the downside (we have not yet seen actions that are usually seen at important bottoms, like huge underperformance of silver [what we saw this week was not huge enough], and gold is not actively hated in the mass media), the odds for a corrective rally are relatively high. We plan to re-enter short positions when we see either a small rally an some kind of confirmation that the next local top is in (more likely scenario in our view) or a confirmation that there will be no visible correction (for example a continuation of the dollar’s rally despite the current turning point). At this time, we prefer to say out of the market.

As always, we’ll keep our subscribers updated should our views on the market change. We will continue to send them our Gold & Silver Trading Alerts on each trading day and we will send additional ones whenever appropriate. If you’d like to receive them, please subscribe today.