Silver to Outperform Gold as the Investment of This Decade 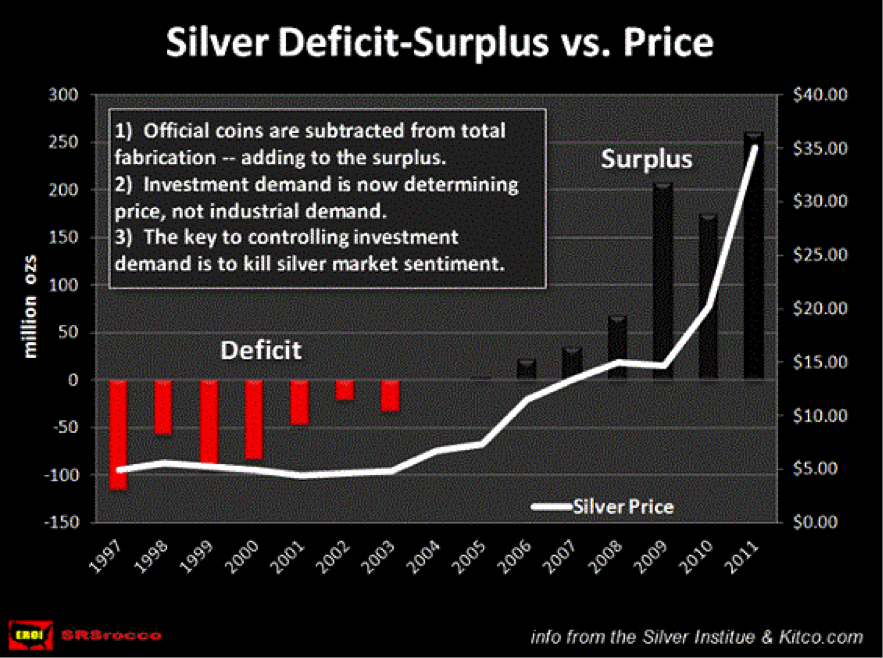 Billionaire commodities investor Eric Sprott got gold right in the last decade and thinks he is going to get an even bigger pop from silver in this decade. He talks to Lauren Lyster on RT television.

Mr. Sprott thinks the central banks are misleading the market and are probably overestimating how much gold they actually have. Silver is outselling gold 53:1 for investment purposes at the US Mint and silver is in shorter supply than gold…

Much credence is given by analysts to the ‘silver surplus’ in predicting lower prices, but they are thus treating silver wildly differently from gold where the equivalent ‘surplus’ is seen as taken up by investment demand.

One of the biggest difficulties facing serious silver analysts, rather than those who just interpret data without looking at, or understanding, its true background is that many of those conducting ‘independent’ (i.e. those who are not themselves  ‘silver bugs’) analyses mostly predict a weak silver price ahead because of what they see as a large silver production surplus.

Gold analysts, on the other hand, have come to accept that any surplus in gold production over normal jewellery and industrial demand is largely accounted for by investment demand.

Surely this is currently exactly the same for silver, and given that this demand appears to be growing sharply, perhaps silver’s demand ‘surplus’ should actually be re-classified as a deficit?

Indeed the graph below (from silverseek.com  where it formed part of an article entitled The forces that will push silver over $100, perhaps demonstrates silver’s reclassification quite dramatically in that when silver supply was genuinely in deficit the metal price languished, but when it moved into ‘surplus’, totally contrary to normal expectations, the price rose dramatically thus apparently defeating what should perhaps be called the first law of economics.

For the price to rise so dramatically, true demand had to be exceeding supply, no matter what the analysts were saying. The graphic thus indicates that although silver is technically in surplus, in reality it is nothing of the kind with huge pent up investment demand more than taking up the available supply.

This does mean very definitely that those banking entities holding enormous short positions in silver are playing a very dangerous game indeed.

They are prepared to gamble big with large futures sales of paper silver to keep the price under control, but the writer is seriously beginning to believe that the views of some of the ardent silver bulls are not the crazy ramblings of fanatics, but express the reality of the situation.

Canadian billionaire Eric Sprott, perhaps the one person with the power to influence the market in terms of demanding delivery of large amounts of physical silver for his Sprott Physical Silver Trust has been using this to test the supply position.

It should be recalled that when Sprott launched the Trust, securing 15 million ounces for it took a full three months before delivery of the metal was received and, according to Sprott, some of the delivery had not even been mined when the order was put in. Recently he raised funds (oversubscribed with the underwriters taking an additional 3,075,000 units through the exercise of an over-allotment clause) for the Trust to buy another 7 million ounces plus.

As of mid November, the Trust has contracted to purchase a total of approximately 7.127 million troy ounces of physical silver bullion. Once the Trust has taken delivery of all the silver bullion, it will publish the serial numbers of all bars held by the Trust on its website. – It will be interesting to see how long it takes for this amount of physical metal to be received.

Indeed silver inventory held in ETFs is running close to record highs despite the big fall in price from the metal’s peak of last year, which suggests most of this investment silver is being held for the long term – not to trade.

And ETF holdings are increasing. Silver coin minting too is running at near record levels suggesting that more and more smaller investors are buying – not to trade, but as a wealth protection measure, while all the time silver’s industrial base demand seems to be rising, particularly given its role in modern day electronics – a sector which will continue to grow as wealth in the BRICS and the developing world continues to increase.

The main worry for the silver investor, though, is the huge overhang of short positions in silver contracts on COMEX.

To an outsider the size of these does not seem logical and there seems to be no sign of their being unwound – even gradually.

Silver’s volatility vis a vis gold is seen by many as being due to the shorts – on the upside for short covering, and on the downside for the big short holders driving the price lower to protect their positions. Some of the massive sales driving the silver price, and/or the gold price, down sharply when they seem to be poised for breakout would seem to have little other logical explanation.

Thus perhaps one should not worry about the seeming silver surplus – in the way that no-one worries about the gold surplus any more – indeed given all the gold held in bank vaults around the world the gold overhang should perhaps be far more worrying than the silver one given that all the old stocks of monetary silver have already been absorbed by the market.

Gold will continue to be bought by those wishing to protect wealth – as it has done historically.  The silver price will no doubt continue to ride on gold’s coattails, but in a more volatile manner.

Given continuing financial uncertainty, which shows no signs of easing, both should remain relatively strong with silver probably having the edge in capital accumulation terms given its two-pronged demand structure – investment and industrial.

Lawrence Williams has been involved with both the technical and the financial end of the mining sector for over 40 years, formerly CEO of top mining industry business publisher, Mining Journal Limited, he is Mineweb’s General Manager and Editorial Director.