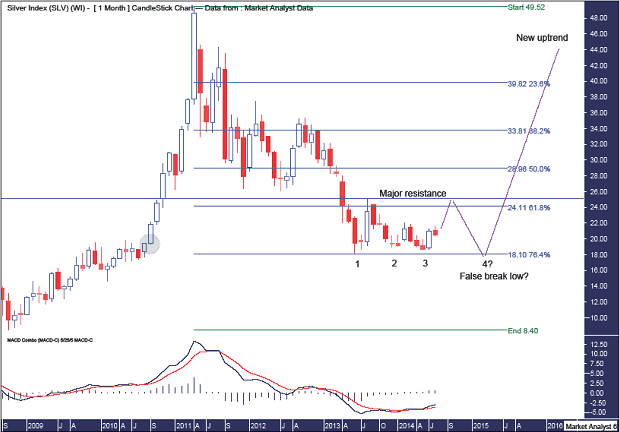 With silver recently putting in a nice 10% plus rally, I thought it was time to follow up my last article on silver, Silver Set To Stun. It’s been two months since that article so there is some new information to process. Let’s get straight into it with the monthly chart. I showed this chart in my previous article but I thought it would be good to refresh our minds and provide a good overview.

I have added Fibonacci retracement levels of the upleg from the 2008 low to 2011 high. Price is finding support at the 76.4% level of US$18.10 after having had three cracks at it. A triple bottom.

Price has bounced strongly off this last bottom and with the Moving Average Convergence Divergence (MACD) indicator currently looking bullish, the blue line being above the red line, perhaps we can expect price to continue higher over the next couple of months.

However, triple bottoms (and double bottoms) are actually not a common trend ending pattern so it is unlikely that price will rise above the previous major swing high set in August 2013. This is denoted by the horizontal line labelled Major resistance and stands at US$25.13.

So, if that analysis is correct, we could expect price to turn back down and bust the triple bottom low of US$18.17. However, I don’t believe this will be a clean break. On the contrary, I think it will only be a marginal break before reversing and putting in a false break low. Why?

Well, firstly, Gann noted that price normally busts support (and resistance) on the fourth attempt. But if a clean break lower isn’t made then that is a very bullish sign. And combine that with a common false break low pattern that runs all the stops that will have built up under the triple bottom low. A nice combo in itself!

So we have three pieces of evidence suggesting the triple bottom price level is a good candidate for the final low price. First, the 76.4% Fibonacci level. Second, an unsuccessful fourth attempt at support which is very bullish. And third, a common false break low pattern.

But let’s add another piece of evidence. If three’s a crowd, then four’s a party! We can see in the green highlighted circle is where price really started to streak away. That is the level whereby price went parabolic. And when correcting, price often pulls back to the level where the explosion higher began. And the current triple bottom is smack bang right in this zone. Woohoo.

Before we crack open the champers, let’s calm down and move onto the weekly chart. I have drawn two black down trending lines. One from the 2011 high and one from the August 2013 high. This recent rally has busted above both of these trend lines. The silver bulls are getting all giddy over this. And fair enough. It’s the first glimmer of hope they’ve had in yonks.

But price looks to be retreating in the very near term. I have added Bollinger Bands and while price has retreated from the upper band it may find support around the middle band. And the Relative Strength Indicator (RSI) looks to be building strength as demonstrated by the up trending line I have drawn along bottoms. So once price finds support shortly, perhaps we could expect a nice push higher. The bulls are certainly pawing the ground ready to charge!

Let’s wrap it up by looing in close with the daily chart. Ok, this looks a bit daunting but let’s break it all down. We’ll begin with the small picture. Price recently rallied from its May low to recent July high. Price now appears to be correcting that rally. I have drawn Fibonacci retracement levels of this rally to help determine where this little correction may end. The two levels that stand out to me are the 50% and 61.8% levels at US$20.09 and US$19.74 respectively. The little blue circle is at the 50% level while the 61.8% level is shown in the little green circle.

I have also drawn a Fibonacci Fan and interestingly the 76.4% angle looks to intersect with the 61.8% level towards the end of the first week of August. From the weekly analysis, we could surmise that this time period for a pullback low fits in quite nicely. Let’s see.

Once the low is in, I’m expecting a strong rally that will put that of gold’s to shame The break above the two down trending lines, as shown on the weekly chart, should provide a good springboard for the next rally. The permabulls are already salivating in anticipation. But more disappointment awaits if my analysis is correct. Knowing that triple bottoms generally don’t end trends, the probability is that the August 2013 high won’t be broken. So, where will the rally end?

I have drawn Fibonacci retracement levels of the down leg from the August 2013 high to recent May 2014 low. I favour a deep retracement, at least up to the 76.4% level and possibly higher. I have drawn two highlighted circles where the 76.4% level intersects with a couple of Fibonacci Fan angles – the 38.2% angle as shown in the orange circle and the 50% angle as shown in the yellow circle. The orange circle occurs in mid September while the yellow circle occurs in mid October. So they are potential timing periods to look for a high. Personally, I favour the orange circle scenario. Let’s see.

Now price may rise even higher so I have added the rarely used 88.6% Fibonacci level. If the 76.4% level is broken then watching this level and where it may connect with any fan angle may reveal the final rally ending point.

I’m not currently involved here, still expecting the final false break low, most likely in 2015, to provide my main entry point. But I’m certainly tempted to get a sliver!