Silver Prices to Outperform Gold in 2015

Posted by Michael Lombardi via SilverSeek.com 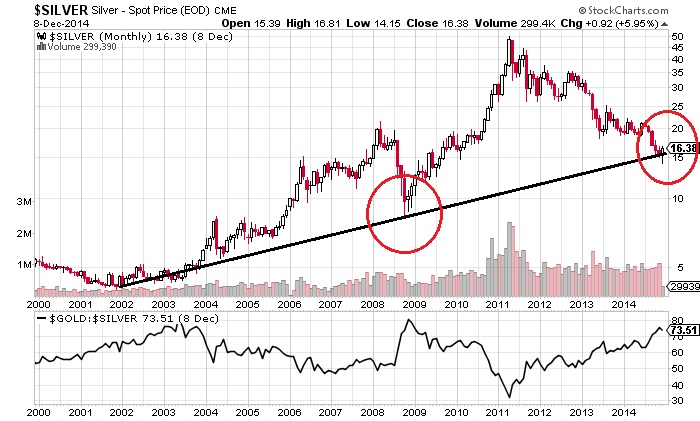 Silver Prices to Outperform Gold in 2015

I know it’s a bold prediction: silver prices are going to surprise investors and provide them with better returns than gold bullion. I say this because both the fundamental and the technical pictures for silver continue to improve.

The supply of silver produced continues to dwindle, while demand for the metal is robust. This is the perfect recipe for higher prices.

Mine production in other silver-producing countries is also on the decline. As silver prices remain low, silver producers have less incentive to produce. And those whose production costs were too high have shut down their operations.

Meanwhile, the demand side for silver remains strong. From January 1 of this year to December 9, the U.S. Mint has sold 42.86 million ounces of silver in American Eagle coins. In the entire year of 2013, the Mint sold 42.67 million ounces in similar coins. (Source: United States Mint web site, last accessed December 9, 2014.) Because of the holidays, December is usually a robust month for silver coin sales; hence, the number of American Eagle coins sold this year will only increase.

Demand for silver from India is strong, too. Ashish Mundhra, managing director of Mundhra Bullion, a precious metal dealer in India, said, “There is a tsunami in silver. Investors are pouring in.” (Source: “Silver Demand Returning, in Patches,”The Wall Street Journal, November 11, 2014.)

When I look at the long-term chart of silver prices, it keeps me optimistic.

Look at the chart below. It shows how the bull market in silver that began in 2002 continues to find support (red circles). The price of silver has certainly come down from its peak in 2011, but remains well above the lows it made in 2009. Below the silver price chart above, I have also plotted the gold-silver ratio. This ratio is simply how many ounces of silver it takes to buy an ounce of gold. It currently sits at 73.51. Looking at it from a historical perspective, since 1970, the average gold-silver ratio has been 55.4.

If we assume the gold-silver ratio will come back to its historical average, either gold prices need to collapse or silver prices will have to increase to at least $22.00 an ounce—34% higher than where they sit today. If the price of gold bullion continues to rise, as it has been since October of this year, then silver prices will need to move higher than $22.00 an ounce, as it regresses back to its historical gold-silver ratio.

Don’t worry about the daily fluctuation in silver prices. The markets are ruled by short-term emotions and irrationality—two conditions that present long-term investors with opportunity to purchase quality senior silver producers at cheap prices.