Imminent Drop in Silver – Prepare to Capitalize on the Downturn 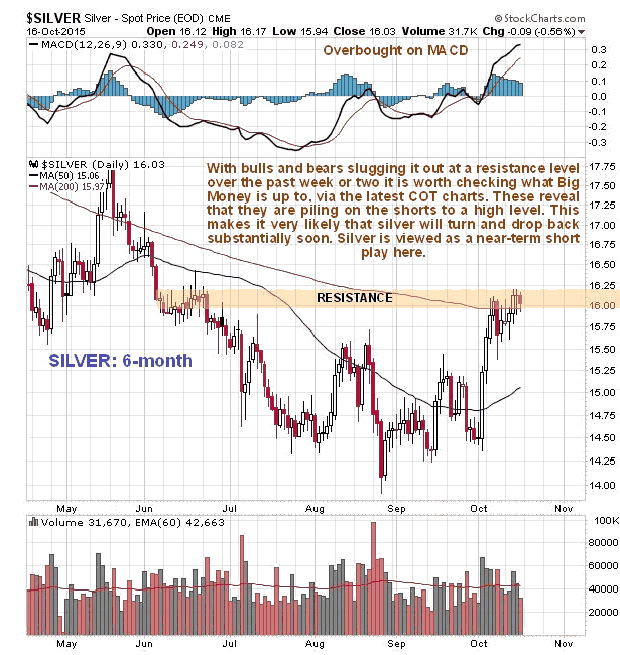 Silverbugs have been getting worked up this month about the possibility of a new bullmarket in their favorite white metal, due to its sharp rally in the early days of the month, but as we will see in this update, the long-term charts and latest COTs reveal that there is little real cause for celebration – on the contrary, we should beware of an imminent downturn in silver and more than that, position ourselves to capitalize on it.

If we start with the 6-month chart, we can quickly see what got silverbugs and their cheerleaders stoked, the sharp rally in the early days of the month, which took silver to a 3-month closing high. The problem now is that not only has silver not made any further significant progress since, as it has battled the resistance near to its 200-day moving average, but the Commercials have been aggressively piling on the shorts as we will soon see, and when you see people who are almost always on the right side of the trade, it’s not a bad idea to align yourself with them. Before leaving the 6-month chart we should note that the 50-day moving average is still quite a way below the 200-day, which is not a favorable configuration. year chart. As we can see it remains stubbornly locked within a major downtrend, and with recent new lows and its moving averages in bearish alignment, this chart provides little real reason for excitement. What would it take to change the still dismal outlook? – that’s easy to answer, a clear breakout from the long-term downtrend. This is not likely to occur of course unless the dollar index breaks down below the critical 92.50 – 93 support level on the index and drops away, so we will continue to keep a keen eye on that. The fact that the Commercials are piling on the shorts here, as we can see on the latest COT chart below, of course implies that both gold and silver will drop, which further implies that the dollar will rally away from the danger zone (shown on the dollar index chart in the parallel Gold Market update). “How could the dollar rally recover?” you may well ask, given the Fed’s enormous money printing of recent years which must be inflationary, and which is still coming through the pipe, but don’t forget that this has to be set against a far greater $500 trillion mountain of atrophying trash overhanging the world financial system in the form of a plethora of bonds and derivatives, which is what is really strangling the world economy. Finally, do not forget that even though the dollar looks like it will recover here to a certain extent, and gold and silver drop, that doesn’t mean it’s “out of the woods” – it could still turn and drop later and crash its key support.