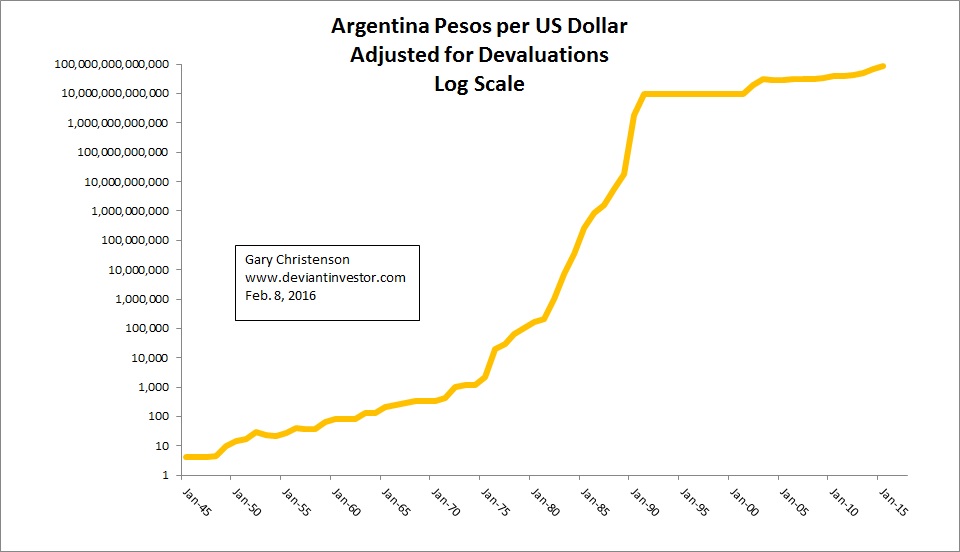 The exchange rate between the Argentina Peso and the US dollar in January 1945 was 4.17 pesos to one dollar.  Like the United States, Argentina created substantial price inflation – devaluation of their currency – in the 1950s – 1990s.

From Alan Greenspan in 1966:  “In the absence of the gold standard, there is no way to protect savings from confiscation through inflation.”

In summary the 1945 peso was devalued by 10 trillion to one between 1945 and 2015.  Imagine what that did to the poor and to the saving of anyone who left that savings or retirement in pesos! Argentina devalued their currency from 1950 onward and more aggressively in the 1970s, 1980s and 1990s.  The difference between Argentina and the United States (and Japan, the EU, the UK, Australia etc.) is mostly a matter of degree.

The global financial system is based on exponentially increasing debt, currency in circulation, and devaluations.  Examples:

The Argentina peso was aggressively devalued over many decades due to excessive government spending, corruption, stupidity, and “central bank printing.”

The US dollar was aggressively devalued over many decades due to excessive government spending, corruption, stupidity, and “central bank printing.”  The rate of devaluation was substantially less in the US, but the basic concept and result were the same – higher prices.

Since the US dollar is backed by “full faith and credit” and not by gold, oil, diamonds, or anything real, exponential increases (since 1971) in public and private debt, expenses, loans, currency in circulation, and prices for most items have been typical.

Exponential increases are occasionally not managed or controlled and increases of 25% to 250% per year occur, as per the above examples.

Such parabolic spikes usually correct in a nasty crash and people invested in those spiking “assets” typically lose money, whether it is the NASDAQ, Nikkei, gold, crude oil, or many others.  Imagine the impact from a crash in the US dollar – it might happen.  (Some suggest it is inevitable.)

Pesos, dollars, yen, euros, pounds, and other fiat currencies will continue to be devalued since we live in a devaluing world.  Backing the US dollar with the military will help, support from petro-dollars will help, “reserve currency” status will help, but the trend is the same – fiat currencies always devalue and gold, on average, holds value.  Examine again the chart of gold prices in Argentina pesos for an extreme example.