Silver and Warnings From Exponential Markets 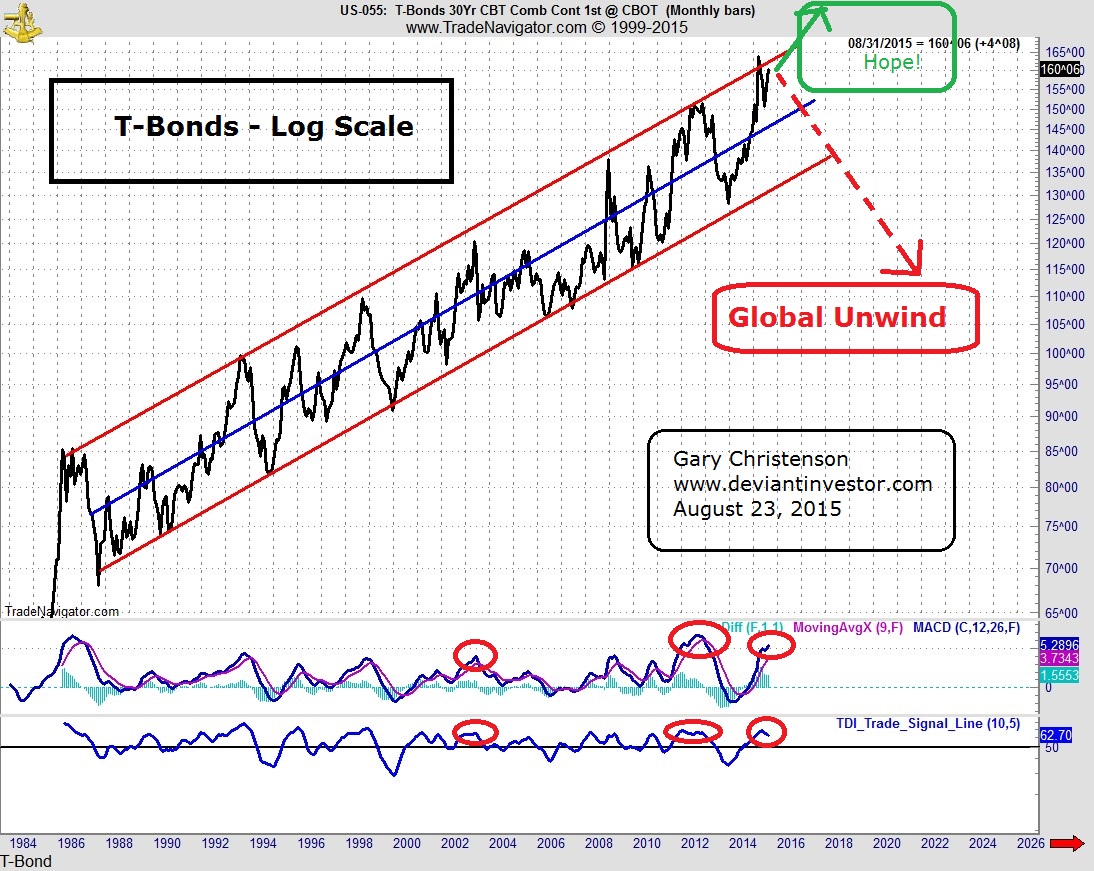 For the past 15 – 40 years, debt and prices in most markets have moved upward, broadly speaking, in exponential trends.  See the following log-scale graphs.

US T-Bonds:  T-Bonds have been rallying in their bull market since the early 1980’s.  Will they continue, correct, or crash?  Doug Noland says it is “The Beginning of the Great Global Unwind.”  See chart. Corn:  Since the late 1990s corn prices have increased in an erratic exponential pattern.  Corn prices are currently way below trend.  Deflationary forces push it downward but devaluation of currencies will push it upward. Dr. Copper:  It has the same basic pattern as corn and sugar (not shown). The Message from the Markets:

Paper markets such as T-Bonds and the S&P 500 have been levitated by central bank “money printing,” government support, and the inevitable devaluation of fiat currencies built into the structure of the financial system.  Paper markets move higher – exponentially – as currencies devalue and reset or crash to lower levels, and then repeat.

“Buy for the long term” works if you buy the lows and lighten up at the highs.  Few people succeed.  NOW is NOT the time to buy most stocks, while NOW is the time to buy silver and gold.  However, few people will transfer their digital currencies into physical metal, and most will regret not doing so.

Commodity markets increase in price due to the same devaluation of currencies that propels paper markets higher.  They also fall when global economies weaken, or when countries manipulate commodity prices lower (e.g. crude oil) to damage the economies of enemies.  These tactics have been used for decades – and will continue to be used by global governments.

But people and economies need commodities such as silver, copper, crude oil, and sugar.  Devaluations, manipulations, supply, demand, taxes, HFTers, and government legislation can push prices far higher and lower for years.  Perhaps some commodity prices will stay low for a while longer, but remember:

Economic policies that devalue currencies and create inflation … will create inflation.  Yes, it is stupid but central banks and governments everywhere use the same flawed thinking.  How are those policies working for people in Venezuela, Argentina, and Ukraine today?  Is it conceptually different in Greece, Russia, the UK, Japan, or the US?

If a government subsidizes butter, it will get more butter.  The US government, and many others, currently subsidize social welfare spending, food stamps (SNAP), poverty, disability income, corporate welfare, military adventures, dependence upon government, media propaganda, financial corruption, medical expenses, Medicare, congressional corruption, and so much more.  Expect more of the same.  The consequences of most of the above will directly or indirectly increase silver prices over the next five years.

Thought Experiment:  Place a few assets in a virtual time capsule that you will open in the year 2020.  Do you want gold coins, silver bars, paper dollar bills, a stock index ETF certificate, a junk bond issued by an insolvent “fracking” company, Apple stock certificates, Venezuela Bolivars, Russian Rubles, junk silver coins, or Hillary 2016 campaign buttons?  In 2020 we will recognize that the value of silver coins, silver bars, and gold coins has increased substantially compared to the other options.

Invest and purchase financial insurance, such as silver and gold, accordingly.