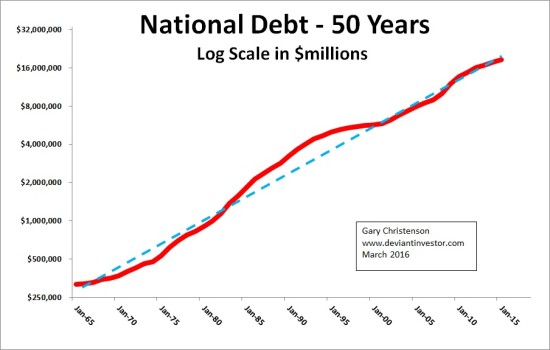 We all know silver is volatile.  When gold rallies, silver usually rallies faster and farther, particularly after the rally has been well established.

Volatility is not a reason to avoid silver.  Instead, now is a time to continue stacking.  Yes, silver almost certainly will correct many times, but examine the big picture.

Over the past 50 years prices for stocks, silver, gold, crude oil, health care, and presidential elections have increased exponentially, mainly due to massive increases in debt (see graph below) and devaluations of currencies.  Expect exponential price increases to continue. What about the DJIA?  Examine the 28 year chart of the DJIA – log scale. Examine the silver (times 700) to DJIA ratio over the past 30 years.  This excludes the 1980 bubble in which the ratio peaked many times higher than the 2011 ratio. There are many financial and political reasons to expect a preference for hard assets over paper assets in the next several years.  A few are:

Silver thrives, paper dies.  This should be true for several more years.