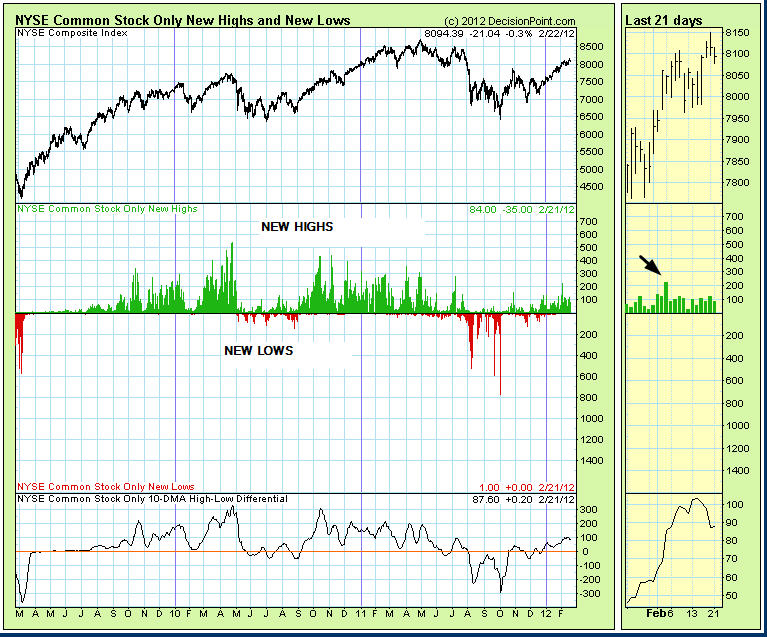 Some downbeat economic numbers from Europe combined with disappointing earnings from Dell Computer to hold stocks under water on Wednesday.

The stock market has been acting somewhat tired, particularly after the so called “deal” on Greece. There doesn’t seem to be a catalyst to push stocks meaningfully higher on the short term.

Besides the overbought condition, one indicator that concerns us is the number of new yearly highs. over the past two weeks, as the market has pushed higher, new highs have attenuated (arrow). That is frequently a signal that the market needs a short rest. We can see this in the chart below courtesy of Decisionpoint.com. GOLD: Gold started off rather lackluster, but came on strongly as the day progressed. The yellow metal is looking pretty good here.
BONDS: Bonds rebounded somewhat on Wednesday.
THE REST: The dollar was up a bit and this probably helped push down silver, copper and crude oil, but gold bucked the trend.
BOTTOM LINE: About the Todd Market Forecast:

We provide daily commentary via e-mail for the stock market, gold,monthly newsletter.

Our approach is mainly technical in nature. We pay attention to chart patterns, volume, overbought – oversold indicators and market sentiment.  However, consideration is also given to fundamentals such as interest rates, Fed policy, earnings and the economy.

We have two main approaches. First we seek to provide specific entry and exit points for conservative investors who utilize mutual funds and ETFs. We also give precise instructions for short term traders who utilize ETFs, Options and stock index futures. To subscribe online go HERE

INDICATOR PARAMETERS
Monetary conditions (+2 means the Fed is actively dropping rates; +1 means a bias toward easing. 0 means neutral, -1 means a bias toward tightening, -2 means actively raising rates). RSI (30 or below is oversold, 80 or above is overbought). McClellan Oscillator ( minus 100 is oversold. Plus 100 is overbought). Composite Gauge (5 or below is negative, 13 or above is positive). Composite Gauge five day m.a. (8.0 or below is overbought. 13.0 or above is oversold). CBOE Put Call Ratio ( Below .80 is a negative. Above 1.00 is a positive). Volatility Index, VIX (low teens bearish, high twenties bullish), VIX % single day change. + 5 or greater bullish. -5 or less, bearish. Advances minus declines three day m.a.( +500 is bearish. – 500 is bullish). Supply Demand 5 day m.a. (.45 or below is a positive. .80 or above is a negative).
No guarantees are made. Traders can and do lose money. The publisher may take positions in recommended securities.