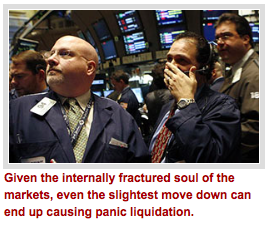 If you’re like most investors, traders and analysts, then you’re enamored with the strength in the Dow Industrials, the S&P 500, and the Nasdaq and you expect them to simply keep on soaring.

You’d be adding to your stock holdings, chasing hot tips and dreaming of riches.

Yet as always, counting your chickens before they’re hatched is a big mistake. Even more so because all available evidence tells me that U.S. and European stock markets are now a recipe for disaster.

All you have to do is look beyond the illusion of the major indices to see why. Since the August low in global stock markets, the rally that has occurred …

FIRST, has been accompanied by declining volume. When a market rises and volume simultaneously declines, it’s a bearish sign.

SECOND, most stocks traded — both here and in Europe — are actually declining. There are very few leaders pushing the major indices higher. In fact, as I pen this column, here in the U.S. …

Of all publicly traded stocks …

Put another way, 77.5% of all publicly traded U.S. stocks are either flat for the year or down more than 10%.

THIRD, of the stocks that are actually advancing, their numbers are also shrinking. Also a very bearish omen.

FIFTH, total margin buying of U.S. equities — according to latest data (Sept. 30) — stands at a whopping $454 billion, just a tad below record highs.

Given the internally fractured soul of the markets, enumerated above, such massive leverage by investors and institutions is a recipe for disaster. Even the slightest move down can end up causing panic liquidation. SIXTH, earnings expectations are largely being slashed, the dollar is starting to soar (a negative for corporate earnings going forward) and several other indicators I monitor …

All tell me the stock market is about as risky now as it ever gets.

The thing is, I’m telling you this despite the fact that I am long-term bullish on the market.

I fully expect the Dow Industrials, for instance, to move up to over 31,000 in the years ahead.

But I won’t touch any stocks here now. No way. Because I know how markets work. And if the Dow Industrials is going to move above Dow 31,000 in the years ahead — which it will do …

It will NOT do so unless it first collapses and scares the dickens out of nearly everyone.

Bottom line: In my opinion, no one in their right mind should be heavily invested in stocks right now.

So what should you do then if you are heavily invested?

What about if you aren’t invested?

Here are my answers:

A. If you’re heavily invested, just get out now. If you cannot get out, for whatever reason, consider hedging your holdings with inverse ETFs, such as the Short Dow 30 ETF (DOG), Short S&P 500 ETF (SH), or Short QQQ ETF (PSQ).

B. If you are not invested, then great. But do consider the potential for some rich capital gains by purchasing the above inverse ETFs, or for even more leverage, their equivalent double and triple leveraged inverse ETFs.

Now, to another market dear to many: Gold.

Gold’s latest rally has failed, miserably, and as expected. That’s music to my ears. As I have said all along, this month is an important cyclical target for both gold and silver. It should produce a major low.