Shrinkflation is an economic monster worth watching 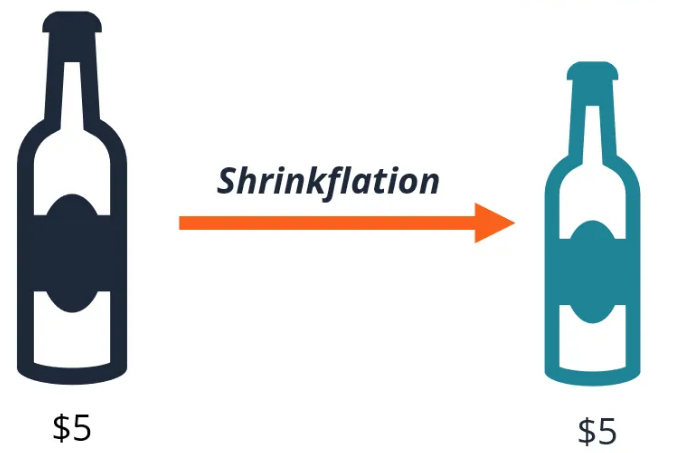 Our friends over at Integrated Wealth Management thought you might enjoy this article. ~Ed.

Ever wonder why you’re going through toilet paper faster (even if your diet hasn’t changed). For those of you alive in the 70’s – did you wonder why all of a sudden gumballs had a hole in the middle? It’s called “shrinkflation” – manufacturers offering less while charging the same price. It’s a “clever” way inflation is killing your purchasing power and probably not reflected in Consumer Price Indices (which we all know are manipulated). Inflation is perhaps the biggest threat to your financial health in the coming years. Make sure to inflation proof your portfolio. This a great article on this phenomenon. ~Sandor Kiss IWM

How will we know if inflation is making a comeback? Most economists are focused on the price of commodities, wages, and other basic goods and services. But history suggests they might want to keep an eye on a related phenomenon that often escapes notice: so-called “shrinkflation.”

This practice became increasingly common in the 1960s and 1970s, when manufacturers confronting runaway inflation tweaked packaging rather than hike prices. At first, the practice attracted relatively little notice: It’s difficult to discern changes in unit prices when they’re camouflaged in different-looking boxes and bags.

In fact, it was the humorist Art Buchwald who was among the first to sound the alarm. In a column entitled “Packaged Inflation” published in 1969, he lampooned the growing tendency to conceal price increases. Tongue in cheek, he praised American industry for “devising new methods to make the product smaller while making the package larger.”

This wasn’t far from the truth. As inflationary pressures rose over the course of the 1970s, manufacturers pursued a number of methods to pass along price increases. The most basic of these was so-called “downsizing” – same package, same price, fewer goods.

In late summer of 1974, for example, Woolworth’s offered a packet of pencils at its back-to-school sale for 99 cents – same price as the previous year. But as a sharp-eyed reporter at The New York Times observed, the packages only contained 24 pencils, six fewer than the previous year. The same strategy affected packets of construction paper (24 sheets, not 30).

The grocery store offered numerous opportunities for downsizers. At the beginning of the decade, that staple of postwar cuisine, Rice-A-Roni, sold boxes containing 8 ounces of the product. Soon, though, it shrank to 6.9 ounces, but the packaging and price remained the same. (Today, the rice-and-vermicelli-filled boxes remain precisely the same weight, which suggests that even shrinkflation has limits.)

This kind of sleight-of-hand became ubiquitous. Everything from cans of tuna fish to jars of spaghetti sauce contained less and less. Advocacy groups like the Consumers’ Union (now Consumer Reports) inveighed against downsizing, but the practice remained widespread…read more.