Should I Stay Or Go 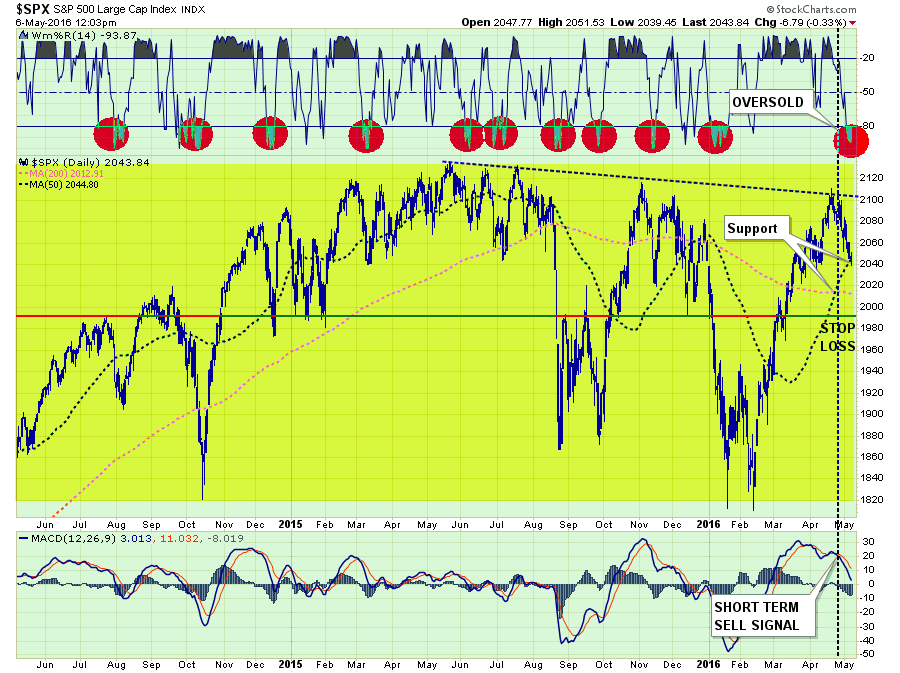 Over the last couple of weeks, the market has been working off the overbought condition that accrued from the surge off the February lows. As I wrote recently:

“With the markets still extremely overbought from the previous advance, the easiest path for prices currently is lower. The clearest support for the markets short-term is where the 50 and 200-day moving averages are crossing. I currently have my stop losses set just below this level as a violation of this support leaves the markets vulnerable to a retest of February lows.” “On a short-term (daily) basis, the current correction is still within the confines of a more normal “profit-taking” process and does not immediately suggests a reversal of previous actions. As shown in the chart above, support currently resides at 2020 & 2040 with the 50-day moving average now trading above the 200-day. “

The yellow band in the chart above is the ongoing trading range the market has remained mired in since May of 2014.

As I have stated in the past, by the time a rally occurs that is strong enough to reverse bearish signals, the market is generally extremely overbought. The market must then work off that overbought condition before the next advance can occur.

“The current correction was not unexpected. It was a function of time before the extreme short-term extension of the market corrected. Like stretching a rubber band to its limits, it must be relaxed before it is stretched again. The question is whether this is simply a “relaxation of the extension” OR is this a resumption of the ongoing topping and correction process?”

Should I Stay Or Go?

It is the last part of the statement above that I want to address this week.

Is this just a correction within the confines of a bullish advance OR is the recent market action just a continuation, and eventual completion, of a market topping process?

The answer: It depends on your investment time frame.

If you are a trader with a time horizon that is from days to a couple of months, the backdrop to the markets are currently more bullish than bearish. As shown below, the number of advancing stocks has broken out of recent downtrends which has historically related to more bullish underpinnings. However, if you are a longer-term investor, particularly within a couple of years of retirement, market dynamics are still exceedingly negative. As shown below, despite the recent surge in the market, not unlike that seen in Oct 2014 and 2015, is still contained within a topping process as witnessed during the peaks of the previous two bull markets. As Michael Kahn penned this past week in Barron’s:

“Like life, the stock market is rarely black or white. Right now, however, the outlook is particularly muddled. In technical analysis, when moving averages cross over each other to the downside we call it black. When they cross to the upside we call it golden. Now, the market is giving off mixed signals, making it no more than a bland beige.”

This is a problem for investors, who despite saying they are long-term investors are always driven by short-term market swings which impact emotional biases. He concludes:

“There is a good argument that stocks are ripe for a correction after a sharp rally, but with the undercurrents in sectors, interest rates, and breadth there is not enough evidence to hand the reins over the bears. Bulls, however, do not have much room for error. The falling U.S. dollar may be the handwriting on the wall, and the Fed better be very careful with its decision at next month’s meeting.”

It is this ongoing “limbo” that continues to weigh on investor sentiment. While the “bulls” have once again emerged onto the field, there is not enough “evidence” currently to suggest an aggressive risk posture in portfolios.

As Bill Henry once quipped: “It is better to be out of a bull market than fully invested in a bear market.”