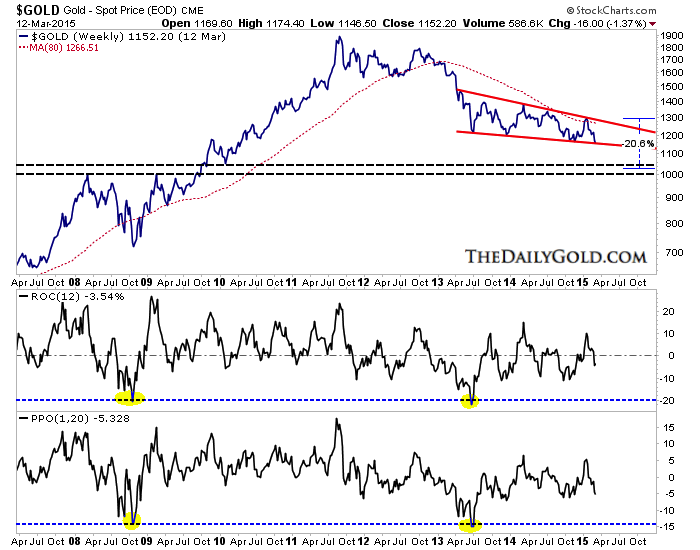 The precious metals sector is oversold and due for a bounce. Miners and metals have endured severe declines in recent weeks and are likely to rebound from the 2014 lows. The miners are just starting to rebound and the metals should follow. However, until proven otherwise this appears to be an oversold bounce that could last only a few weeks. Potential danger lies ahead before a sustained turnaround.

Below is Gold’s weekly line chart dating back to 2007. The metal has traded within in a slight descending channel for nearly two years. A break below such a channel would typically lead to an accelerated decline. If Gold makes a clear weekly close below $1150/oz then it could start to break lower in accelerated fashion towards $1080/oz, the 50% retracement of the entire bull market. Gold does not have strong support until the $1000 to $1040/oz range. Also, though Gold is extremely oversold in a long term sense, that is not the case from a near term view. A move below $1080/oz within the next seven weeks would bring Gold to an extreme near-term oversold condition. The gold stocks are entering the fourth year of their bear market and have essentially repeated the 1996-2000 bear market. In the chart below we compare the HUI’s current bear with its 1996-2000 bear. Note that the HUI made a marginal new high five months after the majority of mining stocks peaked. Otherwise its resemblance would be even closer to its 1996-2000 bear. A few weeks ago we posited that gold stocks could hold the recent lows and perhaps form a huge double bottom. That is now highly unlikely as the sector sold off aggressively when Gold lost $1200. The HUI, trading around 160 has support at 150 to 160. Like Gold it is not yet extremely oversold in the near term sense and lacks immediate downside support. The indicators shown on the chart have much further to go before they reach the extremes seen in 2000, 2008 and 2013. Traders and investors need to be aware of the severe downside potential before a bear market bottom. Gold bugs should strongly consider using any strength to defend themselves against the potential downside that lies ahead. Other than at $1080/oz, Gold does not have strong support until $1000 to $1040/oz. The HUI lacks strong support below 150. Also, gold miners tend to have severe losses before major bottoms. During the financial crisis the HUI declined roughly 50% within a month of its final low. The HUI also declined 34% during the last two months of its 1996-2000 bear. It’s important to note that this is a small sector and forced selling by a few funds can exacerbate losses. A break below 150 HUI could get quite ugly but it would ultimately lead to a spectacular V bottom.