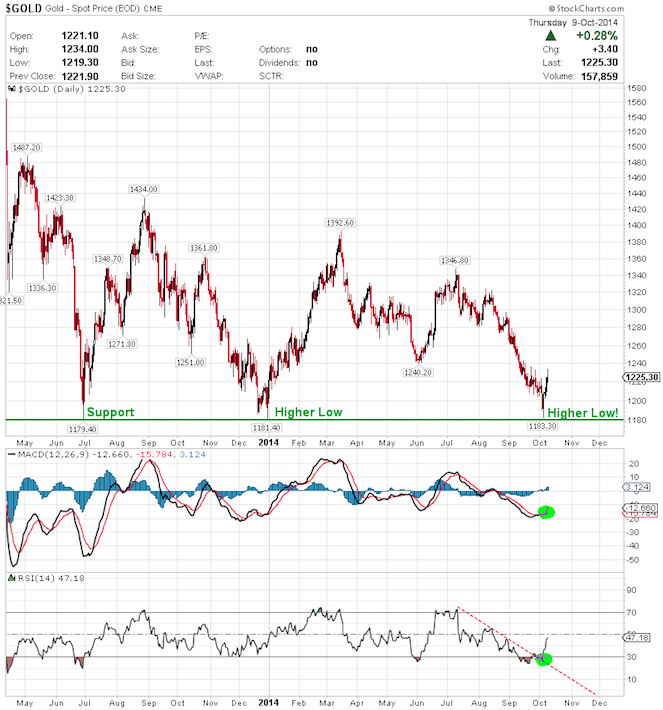 Wednesday, October 8, 2014, looked like another bash down of the already battered precious metals sector, before a dramatic price reversal on massive record volume. Is it “the bottom”? Well, a price reversal on record volume is certainly what a “bottom” is supposed to look like from a technical standpoint. Not only that – but gold has now constructed a bullish “triple bottom” reversal pattern, by printing three sequentially “higher lows”. Of course, there is much work to be done by gold bugs, who must now manage to reverse the trend of lower

highs to higher highs, by first taking out the $1,346.80 level. But a potential reversal pattern, 16 months in the making, will have to do for now.

In the meantime, the much despised and ridiculed (by some) junior miners, as represented by GDXJ, also reversed yesterday on massive record volume. GDXJ continues to outperform gold & silver on a relative basis, and is still in the process of constructing a bullish reversal pattern in the form of a rather mangled, but still intact inverted head and shoulders formation. From a fundamental standpoint, we have now come to a point where it is less expensive for silver miners and some gold producers to buy their metal on the open market rather than mine it! Only in precious metals, and especially silver, could such a circumstance exist, where the earth is still flat, pigs fly, mining executives put their shareholders first, and your government loves you!