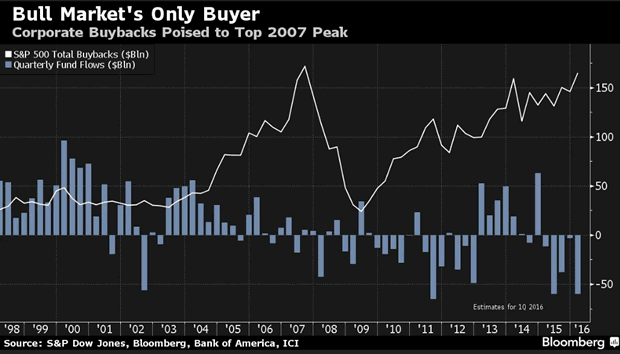 “A man sits as many risks as he runs.” ~ Henry David Thoreau

Robin Hood robbed the Rich to help the poor; in the modern day version the Rich rob both Robin Hood and the poor to become even richer. The rich in this case are the greedy corporations and the officers that run the show behind the scenes. In this lazy world, the only thing that matters is money and how to make as much of it as fast as possible. Hence, the best way to boost earnings without doing anything is to buy back boatloads of shares and in doing so artificially boost earnings. It is a perfect scam.

Companies in the S&P 500 Index are poised to purchase over $165 billion of stock this quarter, bringing us dangerously close to taking out the 2007 record. While Mutual funds and the masses are selling the corporate world is buying, proving that the dumb money is not in the know, even though their actions are based on valid data. Logic does not drive the markets; it’s emotions that are the main driving force behind the markets. $40 billion flowed out the markets via mutual fund sales or individual redemptions, but the corporate world more than covered that slack. One could call this is a positive divergence as the corporate world pumped this money into stocks when the markets were tanking, and the masses fled for the exits. This record binge could continue and here’s why:

Central bankers worldwide are embracing negative interest rates and we all know that low rates favor speculation Look at what the current low rate environment has led to; imagine what will happen in the U.S if rates turn negative. We suspect an all out feeding frenzy will take place. The corporate world will rush in and borrow even more money; the masses will jump into stocks as it will look like earnings are rising, and everyone will have fun until the bottom drops out. The bottom always drops out, but it’s the average Joe that is left holding the can. Nothing has changed, and nothing will change going forward

“Anytime when you’re relying solely on one thing to happen to keep the market going is a dangerous situation,” said Andrew Hopkins, director of equity research at Wilmington Trust Co., which oversees about $70 billion. “Over time, you come to the realization, ‘Look, these companies can’t grow. Borrowing money to buy back stocks is going to come to an end.”‘

“Corporate buybacks are the sole demand for corporate equities in this market,” David Kostin, the chief U.S. equity strategist at Goldman Sachs Group Inc., said in Feb. 23 Bloomberg Television interview. “It’s been a very challenging market this year regarding some of the macro rotations, concerns about China and oil, which have encouraged fund managers to reduce their exposure.” ~ Full story

Companies in the S&P 500 are also flush with cash, so they can borrow the money in the open markets or use some of the cash they have been hoarding. According to Bloomberg, Non-Financial Companies in the SP500 had over $900 billion in cash at the end of 2015; the figure now is probably closer to $1 trillion.

Hedge funds and mutual funds have had a hard time making money over the past few years and have been net sellers as of late. Mass psychology states the masses that always get fried and compared to corporations that are buying back their shares, mutual funds and Hedge funds are sardines.

The trend is up regarding share buybacks, and as Central bankers worldwide are gravitating towards negative rates, it is fairly safe to assume that this trend will continue for quite some time. The masses are not revolting against this form of illicit behaviour and even though the dollar amount deployed to share buybacks continues to rise each year, we are not at the feeding frenzy stage. Hence, expect share buybacks to rise to insane levels.

Nothing short of rising rates could put a damper on share buybacks, and that is not something that will occur anytime soon. The second option is for Congress to pass new laws making restricting companies from blatantly repurchasing their shares with the sole intention of raising their earnings per share. As Congress shares the same bed with these corporate giants, don’t expect such a law to come into effect shortly.

The markets are being manipulated and will continue to be manipulated probably until the end of time, so until the trend changes or share buybacks grind to a halt, every strong pullback has to be viewed as buying opportunity.