Shanghai Gold Exchange: As bullish as some claim? 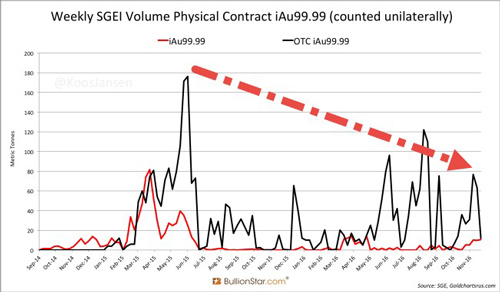 I don’t think so. Here again, most analysts got the Shanghai Gold Exchange (SGE) completely wrong.

The SGE was established in October 2002 by China’s central bank, the People’s Bank of China (“PBOC”) upon approval by State Council and supervised by PBOC.

Officially and fully open for business in September 2014, I personally was the first foreigner to visit the SGE in October 2004 and spoke with the president. Construction was underway, communications, quote pits for the different products and more. It was an interesting visit, under armed guard.

But for the record, let me explain the myth that the SGE is going to boost gold demand and send it to the moon.

The chief reason for the SGE is to officially allow two
types of cross-border trade in gold in China:
To promote general trade and processing trade.

In a nutshell, that means the gold is not brought in to the SGE for investment …

But instead, for manufacturing or assembling purposes after which the finished goods are required to be exported.

Processing trade is meant for China’s manufacturing industry to efficiently connect with the rest of the world. The Chinese and foreign companies engaging in processing trade are exempt from, in example, import duties and Value-Added Tax (VAT).

When gold is imported into the Chinese domestic market, this is referred to as general trade. The agency that controls all forms of gold in general trade is China’s central bank, the People’s Bank of China (PBOC).

Only financial institutions and gold enterprises that carry the Import and Export License of the People’s Bank of China for Gold and Gold Products (the License hereafter) can get gold to pass customs into the Chinese domestic gold market.

The rules for cross-border gold trade in general trade have been lastly drafted by the PBOC in March 2015 and are called Measures for the Import and Export of Gold and Gold Products (the Measures hereafter). In the Measures it’s stated:

The Catalogue for the Regulation of the Import and Export of Gold and Gold Products describes all forms of gold (coins, ore, bullion, unwrought, scraps, jewelry) that can cross the Chinese border. For all gold to be imported into the Chinese domestic gold market the material is required to be accompanied by the License.

… An applicant for the import and export of gold … shall have corporate status, … it is a financial institution member or a market maker on a gold exchange [SGE] approved by the State Council.

… The main market players with the qualifications for the import and export of gold shall assume the liability of balancing the supply and demand of material objects on the domestic gold market. Gold to be imported … shall be registered at a spot gold exchange [SGE] approved by the State Council where the first trade shall be completed.

Next to standard gold there are non-standard gold (for example bullion bars weighing 200g 9999 fine and doré bars), gold products (jewelry, coins and ornaments) and ore.

Non-standard gold, gold products and ore are not required (and not allowed) to be sold through the SGE when imported into the Chinese domestic gold market. Only a limited number of gold enterprises can apply for the License to import non-standard gold, gold products and ore under general trade. Although, the Measures released in March 2015 by the PBOC loosened the requirements for such enterprises.

An example of a gold enterprise that can import non-standard gold into the Chinese domestic gold market: On May 26, 2015, Zijin Mining Group bought a 50% stake in Barrick Gold Corp’s Porgera mine in Papua New Guinea for $298 million.

On October 9, 2015, China Gold Network wrote that Zijin Mining was one of the first mining companies to be granted the qualification by the PBOC to import gold under general trade, allowing Zijin to import doré from Papua New Guinea into the Chinese domestic gold market.

Either way, you can clearly see this is all about regulation, not boosting demand. And indeed, demand through the SGE has declined, pretty much year-over-year, per this table, courtesy of BullionStar.com You can see the surge in trading in mid-2015, but from there on out, it’s pretty much a downtrend.

The SGE will NOT boost gold demand, at least not enough to turn a bear into a bull. And neither will the new Sharia law on gold you’re hearing about.

1. A crash in the dollar. Highly unlikely, though a short-term pullback is in order.

3. A new black market in gold, which is forming.