September is dangerous – A Body of Evidence 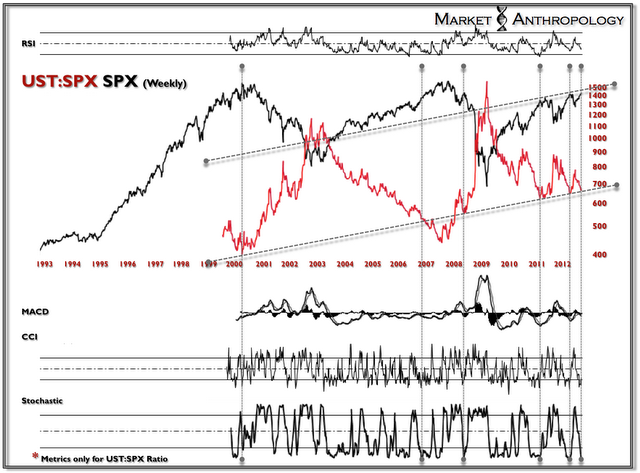 As the market sets sail into what historically has been the most treacherous month of the year (September) – a number of my analog and comparative charts continue to flash warning signals as they extend themselves up to resistance (UST:SPX ratio), into historical extremes (Apple) and into possible momentum downturns (2007/2012 SPX Analog). (Ed Note: The UST:SPX ratio is the 10 Yr US T-Note Price / S&P 500 Large Cap Index)

Apple continues to defy gravity with its parabolic run over the past year. If past is prologue, this parabolic performance chase of the largest market-cap company in the world will mark a major equity market top when the tide turns. It is not a question of if – but when – and the pronounced head and shoulders formation on the MSWORLD index is approaching another turn lower this coming fall.

I have been contrasting aspects of the 2007 daily and hourly tapes over the past several years because of the fractal similarities along various timeframes to the current market. This past spring the market began tracing out a broadening top/megaphone formation that was very similar to the structure of the 2007 market – right before it broke down and established the inverted head and shoulders formation – also a pronounced structure of the 2007 tape. This was initially detailed Here and then subsequently in the following notes, Here and Here. The weekly analog has extended itself further then where I had anticipated it would turn. This may be considered well past an audible – however, it did so in a similar fashion this past March as it worked its way to the pivot lower in April.
Perhaps it is my own bias of perspective, but if it were not for the seasonality, the agreement of various charts – also including the Aussie model that continued to turn down last week  – I would be willing to retire the comparison.
I am not.