Sentiment: Bulls Get Their Groove 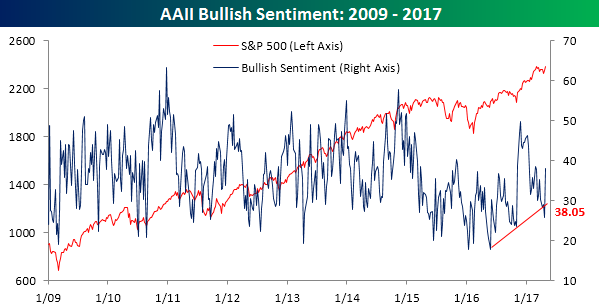 After dropping to its lowest level since the election, bullish sentiment on the part of individual investors surged by the most this week since the week after the election.  According to the weekly survey from the American Association of Individual Investors (AAII), after just one-quarter of individual investors considered themselves bullish last week, more than 38% now put themselves in the bullish camp.  So was it the French election that individual investors were so worried about (kidding)?  Even with this week’s increase, a little perspective for this poll is in order, as it has now been 121 straight weeks since bulls were in the majority. What we will be watching in this poll next week is what happens with bearish sentiment.  In this week’s survey, bears decline from 38.7% down to 31.71%.  Even after this week’s decline, the uptrend in bearish sentiment that has been in place since late last year remains in place (chart below).  If that uptrend breaks, it could be a precursor for a move to a majority in the bullish camp.