See No Evil: What We Chose to Ignore in the April Jobs Report 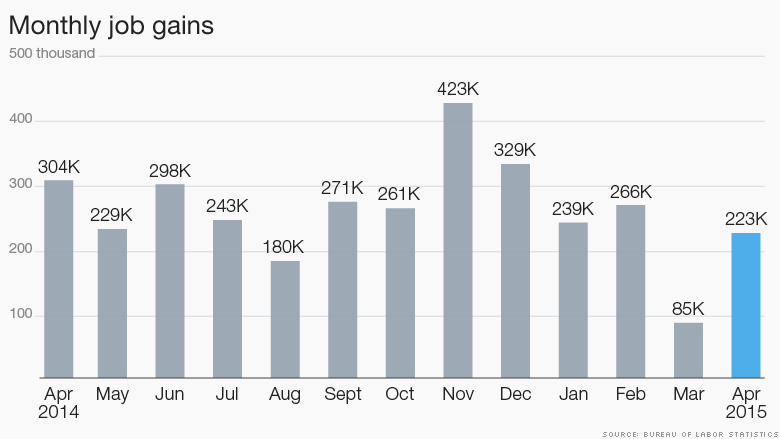 We live in an age where bad economic news is not only unwelcome, but it is routinely overlooked or excused. On the other hand, good news is spotted and trumpeted even when it doesn’t exist. An ideal illustration of this dangerous tendency towards collective selectivity came last week when the markets and the media somehow turned an awful employment report into an ideal data set that confirmed all optimism and contained nothing but good news for investors. In truth, it was anything but.

The stakes were high with this year’s April non-farm payroll report. It was the first major employment report of the Second Quarter and it was hoped that it would show an economy bouncing back from a sluggish winter. But there was cause for concern. The March report had been an unmitigated disaster. Only 126,000 jobs were created when 247,000 were expected. Then, two lesser April employment reports had been released, the ADP private payroll data and the Challenger jobs cuts report that came in far below expectations (Challenger showed the biggest month over month increase in layoffs in three years). Even more harrowing was the recently released .2% annualized GDP in the First Quarter, a dismal April trade deficit, and the worst back to back monthly productivity reports in almost a decade. We needed good news, and we needed it bad. The April report’s headline was all most people needed to see before breathing a collective sigh of relief. 223,000 jobs were created during the month, which was a full 3,000 jobs more than the 220,000 that had been predicted by the consensus of economists. In addition, the unemployment rate held at a very low 5.4% (matching the consensus), the lowest number since the Market Crash of 2008. The steady rate, and the modest beat (of a modest expectation) were received like a strand of garlic to ward away evil spirits. Icing the cake was the understanding that the report was not so good that it would accelerate the Federal Reserve’s timetable to raise interest rates. As a result, it was termed a “Goldilocks” report, which many consider to be the best of all possible outcomes. But even a casual look beneath the surface should have thoroughly deflated the euphoria.

The biggest shock should have been the downward revision of the already weak March numbers, which most people had expected would be revised upwards. Instead, 41,000 jobs were cut from March, leaving only 85,000 hires for the month, making it the worst month in job creation in three years. If March and April were averaged, we would only have about 150,000 jobs per month, numbers that would be indicative of a very weak economy. And don’t forget, April may be revised down next month just as drastically as March.

As you dig down, it gets worse. Average hourly earnings only increased .1%, which was exactly half of the expected .2% increase. They also revised down March’s gain from .4% to .2%. The report showed that the number of Americans who have left the labor force has hit an all-time high of 93,149,000. But the most important set of ignored ugly data was the breakdown of full time vs. part time jobs.

As far as the headline number of job creation is concerned, all jobs are equal. No matter if they involve brain surgery or lawn mowing, or if they are full time or part time, a job is a job. But the April Household Survey, which is released in support of the Nonfarm Payrolls, showed an increase of 437,000 part-time jobs, the biggest gain in part-time employment since June of last year. At the same time, the number of full time jobs declined by 252,000, the biggest drop of the year. Instead of talking about these lost real jobs, we talk about net gain in the total number of jobs which was only made possible by the huge increase in part time jobs. It is safe to say that a great many of those who found part time jobs would have preferred something with more hours and more pay. These facts show how the types of jobs Americans are finding continue to deteriorate, and explains why wage growth has been so disappointing.

It’s also worth noting that up to 175,000 of the new jobs reported in April resulted from assumptions that government statisticians make using the birth/death model. This technique compensates for unknown business formation to assume that a certain number of businesses come into being when the economy is strong. And since the government assumes that the economy is currently strong, it assumes those jobs were created. How convenient.

Another disturbing aspect of the Household Survey is the demographic breakdown of who is working and who is not. In April, workers aged 55 and older gained 266,000 jobs, while workers aged 25-54 lost 19,000 jobs. These results should blow another hole in the theory, repeatedly espoused by Janet Yellen and others, that the labor participation rate is falling because of retiring baby boomers. If that were the case, then you would see the number of older workers going down, not going up. The people who should be retiring are instead taking part-time jobs to keep food on the table or to pay their electric bills. It’s the younger workers, in the prime of their earning potential and who need to be working, who are leaving the labor force in droves.

The fact that this dog of a report could be received like a beauty queen is a testament to how desperate and intellectually complacent Wall Street economists have become. In the days since the report was issued, data that confirms a strong spring rebound has yet to materialize. April retail sales and March business inventories were flat and below expectations. If analysts actually delved beneath the rosy headlines, they would not be surprised that debt-laden consumers, with part-time jobs facing rising costs of basic necessities, were too broke to shop.

The story was much different last spring, when the economy was rocketing upward after contracting in First Quarter. Yet the optimism for the full year surprisingly persists. Few major Wall Street firms have cut their full year GDP predictions below 2.0%, even though such sluggish growth seems more and more likely. The Fed itself has only backed off slightly from its 2.6%-3.0% “Central Tendency” 2015 growth forecast that it issued last December, and now sees full year growth from 2.3%-2.7%. That is already starting to look like wishful thinking. (See my previous commentary). But optimism is hard to kill. Maybe because that’s all we have?

Best Selling author Peter Schiff is the CEO and Chief Global Strategist of Euro Pacific Capital. His podcasts are available on The Peter Schiff Channel on Youtube