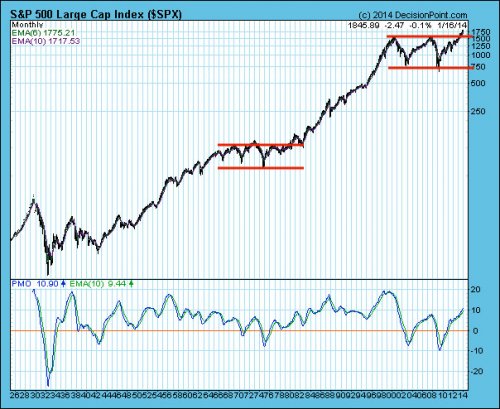 A subscriber said he had heard a number of talking heads claiming that we are in a secular bull market, and he wondered what I thought. My gut reaction was to say “no way”, but then I got to thinking about it.

A secular market refers to a market trend that persists over decades. I pulled up a very long-term chart and noted that the last secular bull market began off the bear market low in 1974. The first clue we would have had that something big was brewing was when the S&P 500 Index broke out of the ragged trading range it had been in during the 1960s and 1970s.

Now note that the S&P 500 has recently broken out of a trading range that spans more than a decade.

[Must Listen: One-on-One With Jim Puplava: Are We in a Stock Market Bubble?] Let’s look at a shorter time frame on a linear chart. The breakout is much more dramatic in this context, and the breakout leg is about one-third the width of the trading range. Pretty convincing, so, yes, I would have to say that, based upon these charts we could be in the early stages of a secular bull market. But so what? The impression that some secular bull proponents would like to make is that we are in for many, many years of steady price appreciation, but secular bull markets are still vulnerable to cyclical bear markets, some of which can be quite severe — case in point, the 1987 Crash. Also, note that the 1980 breakout was followed by a sharp decline back the the top of the trading range. This is the usual technical expectation after a breakout.

The main thing to remember is that we won’t know if it is a secular bull market until after the fact or at least long after it begins. I must say that the breakout looks promising, but it won’t change my basic strategy, which is to try to avoid significant pullbacks in the intermediate-term.

Conclusion: Trading ranges are referred to as continuation patterns because prices are expected to exit them in the same direction they were in before they entered the consolidation trading range. The long-term breakout we are observing is a very positive sign, and supports the idea that a secular bull market is in progress. But the next technical expectation is for price to pull back toward the point of breakout. Let’s see how that goes.

I will probably get some mail pointing out all the fundamental reasons why my conclusions must be wrong, but what I tried to do is set aside everything but the technicals. I think they are pretty clear.

The above content was an excerpt from the January 17, 2014 blog for Decision Point subscribers. Click here for a free trial.