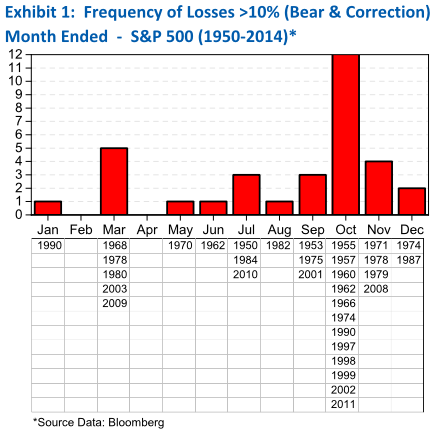 Correcon Could End in October

It is not a coincidence that the favorable six month cycle for stocks starts in late October (October 28th), and Octo- ber is the most frequent months for correcons and bear markets to be “killed,” and the stock market to rally. A cor- recon is defined as a decline of 10% to 19.9% and a bear market as a decline of 20%+.

Since 1950, the S&P 500 has had a total of 33 correcons of 10% or greater. Most of the declines were stopped in the second half of the year and by far, the most common month was October, which accounted for almost 1/3 of the correcons and bear market booms (Exhibit 1). The recent rally has been good, but getting past the old highs is going to be difficult.