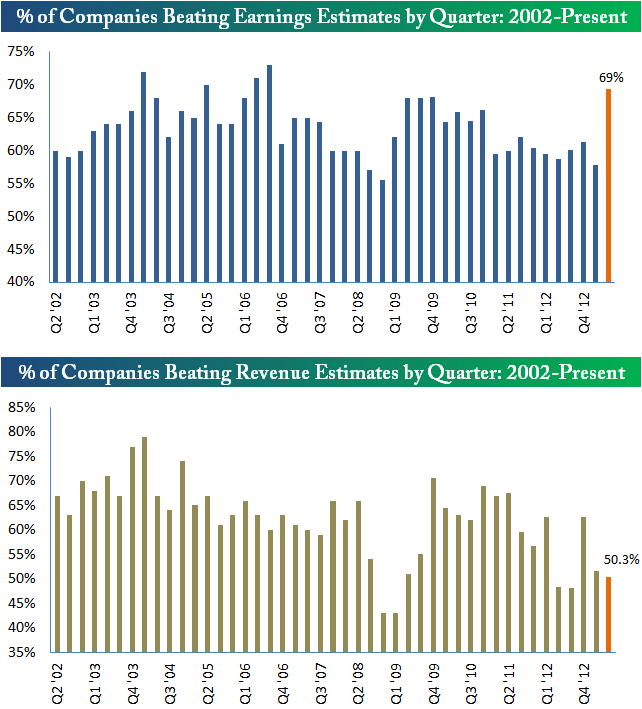 Roughly 150 companies have reported earnings since the second quarter reporting period began on July 8th.  While this is less than a tenth of the total amount of companies set to report throughout earnings season, it’s enough to get an initial reading on the percentage of companies beating earnings and revenue estimates.

As shown in the first chart below, 69% of companies have beaten earnings estimates so far this season.  It’s still very early, but compared to the final quarterly readings over the past few years, the earnings beat rate has gotten off to a great start.  The revenue beat rate, on the other hand, has been below average at just 50%.  Top line numbers have struggled in three of the last four quarters, and it’s looking like the same could be in store this quarter as well.

Looking for more earnings season analysis?  Sign up for a 5-day free trial to Bespoke Premium and use “earnings” in the coupon code section on our Subscribe page to receive a 10% discount on your membership. For reference, we define a bull market as any period where the S&P 500 rises 20% or more (on a closing basis) without a decline in between of 20%.

Bespoke Investment Group was formed in May 2007 by co-founders Paul Hickey and Justin Walters.  Prior to founding Bespoke, Mr. Hickey and Mr. Walters worked and studied under the tutelage of famed market strategist Laszlo Birinyi.  From the outset, our goal at Bespoke has been to provide clients with timely investment ideas that are presented in a way that’s easy to read and understand.  Bespoke’s original content and unique ways of analyzing the market are viewed as a refreshing change from the cookie-cutter research provided by most Wall Street research shops, and this is evidenced by our large following from both individual and institutional investors as well as the financial media, which uses our work on a daily basis.