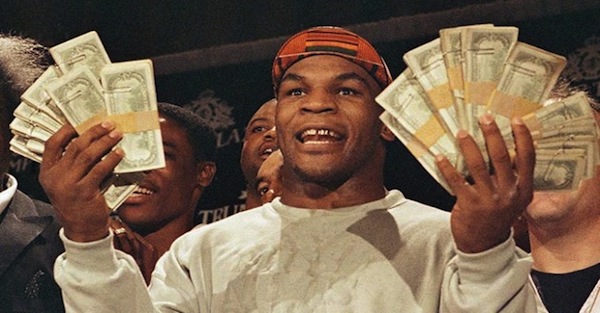 In a crisis, it helps to have good counsel. Consider the following sage advice from investment strategist Mike Tyson:

“Everyone has a plan ‘til they get punched in the mouth.”

“No battle plan ever survives contact with the enemy.”

The enemy has been quick to show himself this year, in the form of a bear market, at least for stocks.

This bear has so far been quick, and indiscriminate: the US; Europe; China; stock markets have fallen sharply, internationally.

Investors, being human, have scrambled in search of an explanatory narrative.

Some have blamed the Fed’s baby steps towards raising interest rates. Some blame the collapse in the oil price.

Last week’s movie night showed David Cronenberg’s 2012 thriller ‘Cosmopolis’, which has Robert Pattinson playing a 28-year-old hedge fund billionaire losing his entire fortune in a single day due to the unexpected rise of the Chinese renminbi.

Other than getting the direction of the renminbi wrong, the movie could have been shot yesterday.

But it has certainly been a good week for bears.

Tuesday brought us SocGen’s Global Strategy Conference, where guest speaker Russell Napier pointed out that growth in emerging market foreign exchange reserves from 2008 to 2014 amounted to the most rapid increase in emerging market money supply in history.

As this process goes into reverse, emerging market growth will clearly suffer.

And since many emerging market countries have over-borrowed in foreign currencies, the fighting in the global currency wars is set to get more intense this year.

As Napier warns, 2016 has also ushered in new rules requiring bond and deposit holders to be bailed in when banks blow up.

The EU (and many of its bank depositors) will come to regret not restructuring their banking system during the seven years post-Lehman when they had the opportunity.

The search for an easy narrative to explain the bear market is probably a waste of time. The financial market is a complex adaptive system and investors are prone to irrational behaviour and mood swings.

They are also prone to overpay. The great ‘value’ investor Benjamin Graham reminded us that,

“Operations for profit should be based not on optimism but on arithmetic.”

The optimists have had things their own way in an almost unbroken line since March 2009. January 2016 so far would suggest that the pragmatists are now in charge.

So the pragmatic response to this month’s volatility – if any is indeed required at all – is as follows:

2) Limit or eliminate exposure to emerging market debt. Raise cash rather than cling to a benchmark with no conviction (and no obvious value).

3) Concentrate any debt exposure to bonds issued by creditors, not debtors.

4) Limit equity exposure to high quality and inexpensive markets offering a ‘margin of safety’. (Most of the US market does not qualify in this regard.)

Russell Napier recommends Japanese equities, currency hedged, and so do we. And in a bear market, you don’t want to own expensive growth, you want to own defensive value.

We would advocate systematic trend-following funds (which can profit in bear markets just as they did in 2008), and gold – the one form of currency that comes with no counterparty risk because it is the one asset that is no-one’s liability.

6) Limit your exposure to mainstream financial media, and especially to economists employed by commercial banks.

Our goal is simple: To help you achieve personal liberty and financial prosperity no matter what happens.

Multiple times every week, we help over 100,000 Sovereign Man subscribers who are taking their family’s liberty and prosperity into their own hands with our free publication, Notes From The Field.

Activate your free subscription today, and get fresh intelligence delivered securely to your inbox as we travel the world discovering the biggest opportunities available to smart, enterprising individuals like you.