Safe Havens Are Trouncing Stocks So Far This Year 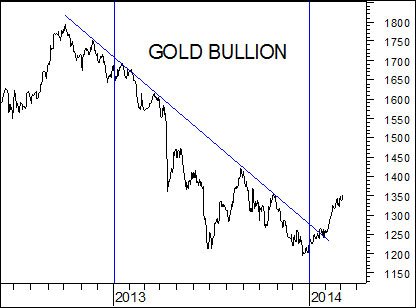 While Stocks continute to soar, the real winner so far in 2014 is last years big loser. This gentleman Sy Harding makes some very interesting points in this article below, not the least being that despite Stocks great big gain of 26% last year they are really only up 1.9% net so far in 2014. Meanwhile last years big loser, gold bullion, which was down 28% last year, is up 12% so far this year. More stunning, Gold Mining Stocks which where down a huge 49% last year on average, are up 20% so far this year. In short, Sy lays out some interesting thoughts in this analysis below. Personally I found it interesting reading and thought you might too. – Editor Money Talks

Safe Havens Are Trouncing Stocks So Far This Year

Investors are going crazy for stocks, piling into individual stocks and equity mutual funds at a near record pace. Investor sentiment polls confirm the high level of bullishness. Margin debt is at record highs. Brokerage firms and polls of investor groups show individual investors have unusually high portfolio allocations skewed to stocks and away from bonds and cash.

Households continue to pull money out of municipal bonds, of which they are the largest holders. Thomson Reuters reported this week that new municipal bond sales hit a 14-year low in February, “as individuals continue to flee from bonds to put their money into the rising stock market”.

But wait a minute.

Who is selling the stock to those clamoring for more? Someone must be, given that stocks are barely up for the year so far. Who is buying the bonds individuals are fleeing from, since demand for bonds seems to have them rising in price in spite of the selling?

That also shows in the data.

However, mutual funds and ETFs invested in 20-year bonds (TLT), were down 16% last year, but are up 6% so far this year.

[Must Read: Ned Schmidt: The Bear Market in Gold Is Over] In my January 3 column ‘Will 2013 Winners Also Be Winners in 2014’, I noted how it is often a mistake to chase the previous year’s winners after they have already had several years of gains. I quoted John Rekenthaler, V.P. of research at fund-ranking service Morningstar, who says that almost always “Investors piling into the hottest funds of the previous period will be sorry, since the lower ranked funds tend to be the winners over the next three-year period.”

I noted in that column that if it is advisable for investors to choose from the previous period’s losers there was one stand-out – gold.

Gold does have a few positives going for it this year that it didn’t have last year, in addition to the much lower price.

For instance, beginning in 2012, India, the world’s largest consumer and importer of gold, raised its import tax on gold from 2% to 10%, in an effort to cool off demand for gold (which was draining off too much cash from India’s economy). The move worked to slow demand for gold, but created a hardship for India’s important jewelry manufacturing and exporting industry. Beginning last fall India has been cutting back the gold tax, and is expected to continue to do so.

Gold is also the traditional hedge against global instabilities and uncertainties.

It was spiked up to its record $1,900 an ounce in 2011 as the ‘Arab spring’ uprisings, which began in Egypt in 2010, began to proliferate into neighboring countries. Those uprisings settled down considerably in 2012 and 2013, and gold plunged in its 37% bear market decline.

However, this year’s eruption of violence in South Sudan, and the civil wars in Syria and Ukraine (now with Russia’s involvement), among other global hotspots, have global uncertainties back in the headlines.

We primarily utilize technical analysis for our buy and sell signals, but the fundamentals seem to also support a positive outlook for gold. So far this year, it also confirms the notion that the previous period’s losers are often the winners in the next period.

In the interest of full disclosure, my subscribers and I have positions in the gold bullion SPDR Trust Gold etf, symbol GLD, and the gold mining stocks etf Market Vectors Gold Miners, symbol GDX.