Russell: Take Advantage of the Fed’s “Manipulation” of Mkts 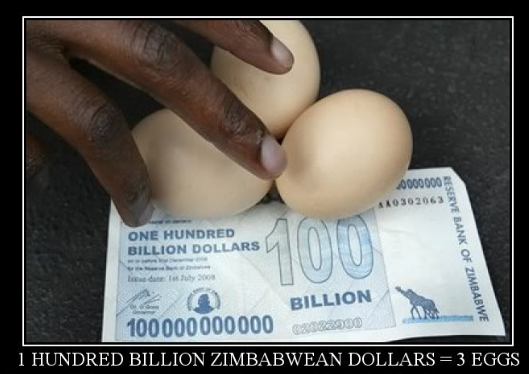 “I’ve been noting the prices being paid by the wealthy 5% of Americans and by foreigners may be a sign of things (prices) to come.  Is the $19 billion that Facebook paid for What’sApp a hint of future prices?  It occurred to me that the extraordinary prices being paid by today’s wealthy could correspond to the hyperinflationary prices that we will see 3-5 years in the future.  Thus I think today’s wealthy are establishing the hyperinflationary prices that we may see in all items during the next 3-5 years. I dreamed last night … In my dream I was telling people that the whole stock market will shortly be lifting up from an oversold base.  I was telling people that the prices of everything will be rising until at some point hyperinflation finally takes over.  At that point the trillions of dollars that the Fed has injected into the banking system will suddenly seize the market and all tangibles in its grip.  The price level of everything will levitate to meet the astounding levels that we now see in auction prices and in the news.

I believe all primary trends run to conclusion.  All primary trends end in exhaustion and extremes in blue chip prices.  The primary bear market that started in 2008 was never allowed to run its full course to completion.  At the 2009 low, the market was severely oversold and in need of a “rest.”  At that same time a terrified Federal Reserve stepped in with massive infusions of liquidity, thereby giving impetus to the upward correction that had started in the stock market.  I believe the Fed’s machinations will set off hyperinflation somewhere during the next two to four years.  I believe hyperinflation will be followed by a continuation of the primary bear market.

In my 65 years of dealing with markets, I was always dealing with fair supply-and-demand markets.  The Fed’s manipulation of the markets upsets the old “rules” of supply and demand.  I believe that when this primary bear market breathes its last, the US public will be furious with the Fed.  At some time in the future, the Fed will be perceived as a menace to the nation and will be abolished by an act of Congress.

Late Notes — Today’s action was pretty much as expected. The Dow gave us the usual hundred point pop, confirmed with a 32 point rise in the Transports.  Gold continued its sterling performance, along with higher prices in silver.  Stay with your gold positions and if you haven’t done so yet, add CEF to your portfolio.