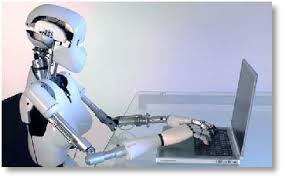 A study says that by 2025 the cost of  a robot that does welding will be less than $2 an hour. That’ll keep Union Shop Stewards awake at night. Australia’s Dept. of Industry  predicts that 500,000 high skilled jobs like accounting and finance will be replaced by robots and automation! There’s a lot of competition for a job. (Transcript & links below) One subject that can always guarantee some angry emails and usually name-calling along lines of “I’m a moron to suggest that technological substitution has to be considered in so many areas from minimum wage, to government subsidies, healthcare reform and transit. It’s a good bet these people won’t want to consider the impact of technology on the Presidential election, where Donald Trump rode blue-collar job losses to the white house in some key states.

Mr. Trump blamed foreign competition, especially from China, for those losses but that’s not even close to the whole story. Some estimates run as high as 75% of the job losses were due to technology, only 25% to foreign competition. And there’s more to come. A quick example, the Boston Consulting Group predicts that by 2025 the operating cost of a robot that does welding will be less than $2 per hour. We already know driverless taxis and trucks are being tested.
Even if some manufacturing jobs to return to the states there’s a high probability that hose jobs will already be automated. There’s no shortage of reports warning of job losses due to technology. This week it was the United Nations, just over a year ago Australia’s Department of Industry released a report concluding that robots and automation could displace more than 500,000 jobs in high-skilled industries like accounting and finance. Very soon too. The Davos World Economic forum predicted the net job loss of 5.1 million thanks to the tech revolution.
Mr. Trump’s victory illustrates technology is not just impacting jobs. The failure on the part of the political establishment to first understand, and then help workers adjust played a major role in the election outcome.
Michael Campbell

….also from Michael: The Main Investment Theme For the Next Decade

Join Michael for Money Talks every Saturday from 8:30am to 10:00am PST. Listen live on CKNW.com, CHQR.com or via podcast at Moneytalks.net