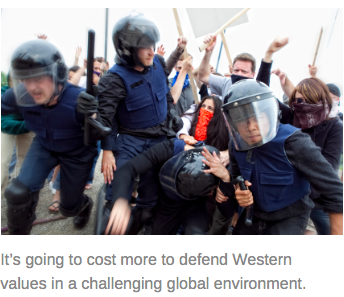 It’s happening on cue: Over the last few days, some of the world’s most volatile nations are provoking the Trump administration big-time. Consider what’s happened …

Test #1. North Korea test-launched a new ballistic missile into the East Sea. The U.N. Security Council and Japanese Prime Minister Abe strongly condemned the act. President Trump says the U.S. has Japan’s back — but we both know that’s not going to deter North Korea’s military ambitions. It failed to stop the previous four launches.

What we know: North Korea is making great strides in advancing their nuclear arsenal, with a new mobile launching system and the use of solid (nuclear) fuel. The ultimate goal: Attacking the U.S. and its allies. This new arsenal is harder to detect and increases its range — both providing a greater threat to national security.

Test #2. Russia spy ship spotted cruising along the Eastern U.S. seaboard. The ship is armed with surface-to-air missiles and is used to intercept communications.

Test #3. Four Russian jets fly within 200 yards of U.S. Navy destroyer USS Porter in the Black Sea. Interestingly, the Russian jets had transponders off and unable to acknowledge multiple radio calls from the American warship.

Test #4. There were reports this week that Russia deployed a new type of nuclear cruise missile that’s in direct conflict with the 1987 Intermediate-Range Nuclear Forces Treaty with the U.S. It’s interesting how all these events are developing like a carefully orchestrated mission – in line with my war cycle forecasts.

Perhaps that’s why U.S. Defense Chief “Mad dog” Mattis prodded NATO member countries to pony up more capital into the defense fund. In fact, he’s looked for 2% of their GDP.

Officials from Germany and the U.K. agree, seeing the writing on the wall: It’s going to cost more to defend Western values in a challenging global environment.

But that’s exactly what I’ve been warning about since debuting forecasts of my war cycle research in December 2013. I said back then that the world would experience an environment of rising domestic and international unrest until at least 2020.

And that’s coming true in spades.

This geo-political hotbed could cause all kinds of economic and financial repercussions that could strip you of your wealth in the months and years ahead OR present once-in-a-lifetime opportunities to protect you and yours.

But it all depends on the quality of your guidance — and your ability to think for yourself, especially in times like these.