Posted by Richard Russell - The Godfather of Newsletter Writers 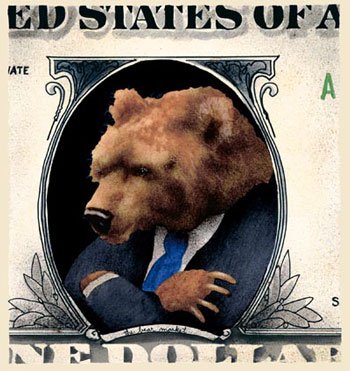 “Old timers remember the terrible Dust Bowl of the 1930s.  Now we have the “Dry Bowl” of the 2000s.  The West is now suffering from the longest period of no rain and aridity in memory.  It’s going to drive up the price of all agriculturals.  For years I’ve been telling fellow San Diegans to plant cacti instead of grass.  These people used to laugh at me.  They no longer laugh.

Since infancy I’ve always been ultra-sensitive to danger.  For this reason I have never been caught in a primary bear market — my sensitivity to impending danger (and Dow Theory) has always saved me and my subscribers.  But this time my unconscious fear is unrelenting, and it won’t leave me alone. Finally, I’ve admitted it to myself.  I’m afraid we’re in a primary bear market in the economy and the stock market.  I believe it’s going to be an absolute “brute.”  And I’m afraid of what might lie ahead.

And the worst of it is that we’re being deliberately lied to by the Fed and by our government.  The markets (which normally tell us the truth) are being controlled and manipulated by the government and the Federal Reserve.

Ben Bernanke is reputed to be an “expert” on the Great Depression of the 1930s.  I don’t know about his expertise regarding the Depression, but I’m damn sure Bernanke doesn’t understand markets.

I’ve asked myself why Bernanke got himself into this predicament?  I believe his problem is that he studied the Great Depression strictly from the standpoint of economics and the Fed’s role in the Depression.  But Bernanke never studied nor understood the role of the stock market during the 1930s.

I had the fortunate experience of studying the events of the 1930s under the tutelage of the great Dow Theory genius, E. George Schaefer.  George understood the power and essence of the primary trend more thoroughly than any analyst I have ever known.  I consider a thorough knowledge and understanding of the primary trend the single most important and least understood area of stock market analysis.

I sincerely doubt whether Yellen will realize that we are now in a resumption of the primary bear market that started in 2000.  I liken the whole current picture to a ship that has sprung a terrible leak and the captain is waving an empty bottle while singing, “Happy days are here again.”

Ironically and tragically, Bernanke continues to believe that his Fed stimulus will render the US economy so healthy that by the end of this year, Fed stimulus will no longer be needed.  Bernanke’s reign at the Fed is over, and the job now falls to Janet Yellen.  I doubt if Yellen’s knowledge of markets is any better than Bernanke’s.  If so, I wish her well, but I don’t envy her.  As the situation becomes progressively more bearish, my best guess is that Yellen will continue to fight the primary bear trend with all the ammunition at the Fed’s command.”

Russell added: “Tuesday’s weak action was a continuation of the “dead cat bounce” correction of the recent crash.  Although the Dow ended weakly, losing about five points, it seems to me the Transports, down 59 points as I write, are leading the way for this market.  GLD and CEF closed a bit higher.  And Treasuries closed lower, pushing rates higher.  I’ll remind subscribers that the economy continues to slide in this bear market, regardless of minor stock fluctuations.

Interestingly, big box retailers are losing their middle class buyers, and it’s only the wealthy that are brightening their favorite retail stores, such as Tiffany and Nordstrom.  The battered middle class are frequenting their favorite discounters, leaving their previous favorites such as Target, JC Penney and Best Buy wondering why their same store sales are fading.  Again I advise subscribers to stay on the side and watch history unfold.”