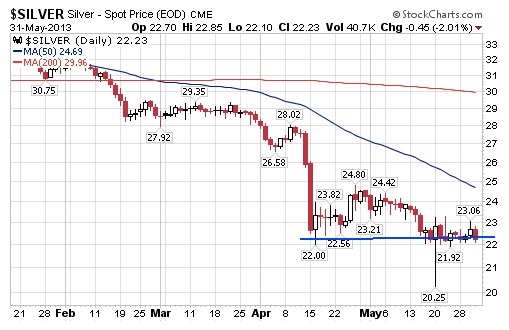 Personally, I’ve voted against the Bernanke way.  The reason is that I never thought it was possible to halt and then reverse the primary trend of the stock market or the economy — any more than I think we can halt the dawn and thus hold back the night.

One of the basic theorems of Dow Theory is that the primary trend of the market cannot be reversed.  Once a bull or bear market is under way, one way or another, it will run its course to conclusion.  The primary trend of the market and the economy is based on human sentiment — greed and fear, bear markets and bull markets end in exhaustion.  Bear markets end when the last sellers have exhausted their desire to sell.  Bull markets end when the last group of buyers have had enough.

After reading my Thursday site on megaphone formations, subscribers may now be wondering whether Friday’s action represented the start of the collapse in the Dow’s megaphone formation.  Unfortunately, I must state that there is absolutely no way of knowing.  This means that holders of stocks must make a personal decision.  Sell or take the consequences — if, indeed, the great megaphone pattern in the Dow is in the early stage of crashing.

Personally, I never wanted to be in this position.  I have already made the judgment that this market was over-bought, over-valued and over-loved.  I also noted that margin borrowing on the NYSE was near a record high — investors were borrowing heavily and greedily to increase their positions in this market.  Treasury bonds were sliding and interest rates were rising.

Incidentally, I note that there are now five distribution days for the S&P and four for the Nasdaq.  And one churning or stalling day on Thursday.  This tells me that institutional money wants OUT of this market, which is another indication that being out of this market is the correct position.  A stalling day is a session in which the market is up only slightly on rising volume.

We’re now in June which, historically, is the worst month for stocks.  The next five months make up the “bad” six months of every year for stocks (“Sell in May and go away”).  All things considered, this is not a market I want to be in.  My preference has been to buy dividend-paying blue chip stocks at or near bear market bottoms, at which time great stocks are usually sold for whatever the bid may be (and the bids at a bear market bottom are usually “below known value”).  Conclusion — I would probably stay with this market if I owned the diamonds (DIAs), and be ready to sell if the market turns nasty.  If I was out of the market I would stay out.”

In the coming weeks and months we will have a chance to see whether Bernanke can “do it better.”  From my standpoint, I see only two courses for the Bernanke Fed, (1) sit tight and HOPE that everything works out as originally planned, or (2) step up QE-2-infinity even further on the thesis that “if first, you don’t succeed, then try, try again.”

Other than that I see the picture as a battle — the Bernanke Fed versus the power of the primary trend (plus perhaps the unintended consequences of attempting to halt the path of the great primary trend).”

“Gold represents wealth.  It is the staple around which everything else revolves.  Alan Greenspan agreed with this in an article he wrote in 1966. But when Greenspan was chosen as Fed chief, he turned his back on gold in favor of power and prestige and Federal Reserve notes.

From there, his career went downhill, he’s now considered a sad joke. When Ben Bernanke was asked if gold was money, he dodged the question, and by omission he denied that gold was money.  This was the beginning of his troubles.  He was living a lie.

When you start with a dishonest premise, everything that follows will fail to work. The Constitution of the United States (Article 1 Section 10) tells us that “No State shall make any Thing but gold and silver Coin a Tender in payment of debts.”

The Federal Reserve acts on the thesis that their Federal Reserve notes can be used as tender in the payment of debts, a premise in direct opposition to the US Constitution.  I see this betrayal as the basic cause for all the troubles that we are now contending with.

The ratio of debt to Gross National Product in the US is climbing up off the charts.  This never could have happened if the gold standard was in use.  The US is like a 500 pound fat man who faces the choice of an extreme diet or a lingering death.  To actually solve our problem, Americans would have to choose an extreme decline in living standards (and deflation) while at the same time boosting their savings radically.  Americans would never submit to a drastic decline in our living standards and deflation.  The unappetizing other side of the coin is that we continue to live it up, while China buys up our nation, piece by piece.

What is the worst possible environment for investing?  The Fed has given it to us — A low interest environment along with an eroding currency.  That’s what we have now.  At present there’s no perfect or even a satisfactory investment position.  You are not safe in bonds, you are not safe in stocks, and you are not safe in cash.  Which is why I choose gold.  It doesn’t bring in income, but it will be around when everything else is in ruins.  And if the whole current house of cards starts to fall apart, chances are that there will be a huge panic to own gold, which is out of the Fed’s and the government’s grip.”

Russell’s warning for silver bears: “Everybody hates silver, and everybody wants to short it.  But keep your eye on silver.” (the chart on the day he published these extraordinary comments)