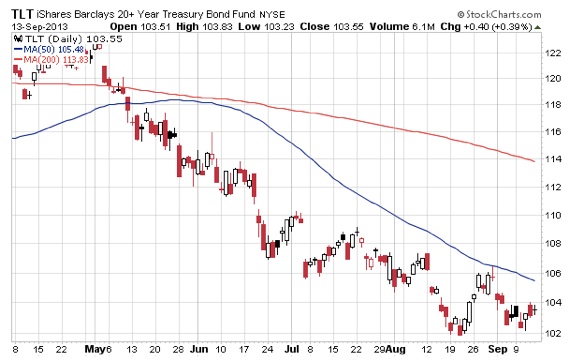 “Ever since I started Dow Theory Letters (Richard is 88 & began publishing in 1958) I’ve been extolling the magic of compounding.  But how about the magic of compounding in reverse along with rising interest rates?  Below we see the widely-followed TLT fund, and sadly, it’s in a distinct downtrend.  Declining bonds mean rising interest rates, and as the government rolls over its monstrous and compounding debt, the situations becomes increasingly impossible to manage. Question – where is the government going to get the additional money needed to manage the debt?  Easy, the Treasury will just issue more bonds.  And who will buy the bonds?  Certainly not Japan or China, they are trying to unload their cache of Treasuries.  Well, as usual, the Fed will buy the bonds — hasn’t the Fed been buying all the government’s debt for months?  But as all this new money is being created, won’t this flatten the dollar and cause inflation?  Maybe, but we’ll worry about that later — if it happens.

Why guess when we have charts that let us see exactly what is happening.  Below we see the US dollar.  The dollar has fallen below both its 50-day and 200-day moving averages.  Recent weakness in the dollar is probably due to the mounting budget and debt concerns. What about interest rates?  Below we see the rate on the bellwether 10-Year Treasury Note.  The rate has doubled since earlier this year.  The normal rate, without QE, is thought to be about 4-5%.  As these rates rise, it pushes the national debt to new highs — there’s nothing more powerful than compounding our debt with increasingly higher rates. Below, we see VIX, the volatility index.  The VIX has dropped to a super-low level, below 15.  I wonder if this could be the calm before the storm. Because it is so important, I’m including a P&F chart of silver below.  Silver has (recently) rallied and is now ready to attack resistance starting at the 27 box.  A bullish upside effort would arrive if silver can move into the 32 to 33 boxes.  This could just be an exciting week! Russell opinions — The institutions and pension funds need money — income or profits.  There’s no place that’s offering safe income, so money managers are forced to go to the one place where there is upside activity, and that’s the stock market and more specifically the Dow.  The concentrated buying in the Dow has propelled the Average to wonderland.

If you buy the Dow or the DIAs here you are buying on the thesis that you will be able to sell your shares at a higher price to a greater fool.  You and I are not pressured to be in this market.  Because of the current madness, a few well-known money managers have recently quit the business.  I’m staying with it, but I’m offering fewer opinions and more charts.  The charts allow me to tell my subscribers what’s happening and what has happened.  As one advisor put it, “I’m not only unsure of where the market’s going, I’m not even sure of where it is.”

The History of the Dow Theory