Gold Now Rising On A “Stairway Of Hatred” 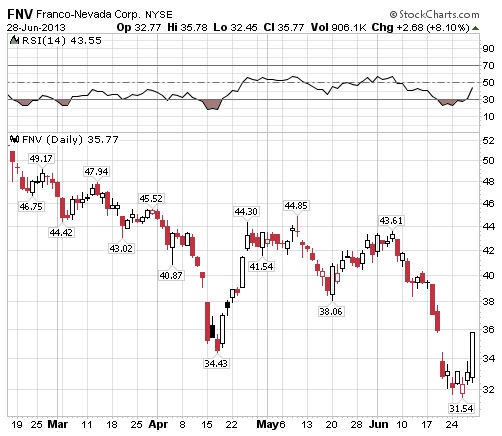 “Sentiment against gold is so bearish that I thought gold could have struck a capitulation low last week.” – Comment extracted from the writing below by the legendary 89 year old Richard Russell. Russell has been writing about markets for 60 years. He has lived through depressions and booms, through good times and bad, through war and peace. He was educated at Rutgers and received his BA at NYU. Russell flew as a combat bombardier on B-25 Mitchell Bombers with the 12th Air Force during World War II.and is widely known as the Godfather of Newsletter writers. Since the advent of the internet he has written daily and delivers his subscribers an extraordinary value for the market experience that they get and the pittance that he charges (for Trial see below). Russell’s stunning comment below:

“Friday ended with a late sell-off in the Dow, and some fireworks in the gold area.  The real gold action was in the mining shares, which, because they are highly leveraged, tend to lead the actual price of gold bullion.

It’s notable that nobody talks or writes any more about the price movement in the market.  99% of everything written about the market has to do with the news and how it might affect the market.  As a result, I feel all alone in writing about the action of the stock averages, and its implications.

For instance, I’ve described the “box” or the trading range that we now find the Dow in.  What are the implications of a Dow break out above or below the trading range?  In the meantime, what are the Transports and the A-D line doing?  I search Barron’s for a column or even a paragraph on the price action but not a word.  It’s all endless conjectures regarding what the Fed may or may not do.

Next, I want to talk about another forbidden and hated subject — gold and gold miners (my, how gold is despised these days).

I am going to show charts of some representative gold miners, and you’ll notice that RSI (relative strength) is, or was, in almost all cases below 30 which puts them in the oversold area.  And note the bullish action of last Friday, which almost nobody has commented on. Below, the ARCA “gold bugs” Index What’s significant is that all these gold items saw RSI in the oversold (below 30) area, and all surged higher on Friday.  Also, anti-precious metals sentiment was so black-bearish last week that I thought, along with RSI below 30, that we might, at last, have struck a true bottom in the precious metals.  Of course, it’s always possible that after Friday’s explosion, the gold miners may back off this week and test last week’s lows.

I thought it significant that when gold was declining, there was no end of publicity about the “dreadful action” of gold.  But when the gold miners surged on Friday — not a word appeared about the bullish action of gold and the gold miners, NOT a word!

If true, that gold has seen its lows, then adventurous subscribers might buy some out-of-the money gold calls.  If gold and silver head higher, you’ll make money with the calls, and all you can lose is the original price of the calls you buy.  Check with your broker.

Gold was up 32.00 to 1255.70 (on Monday) and the whole gold universe closed higher.  Gold is so hated that it could rally over $1500, and nobody would notice it.  Sentiment against gold is so bearish that I thought gold could have struck a capitulation low last week.  Another bearish piece in today’s issue of USA Today.  Talk about rising on a stairway of hatred, you’re seeing it now in gold!”

Richard Russell’s Dow Theory Letters, which he publishes daily for a small annual fee can be subscribed too HERE.