Retiring Abroad: Ever Thought About It? 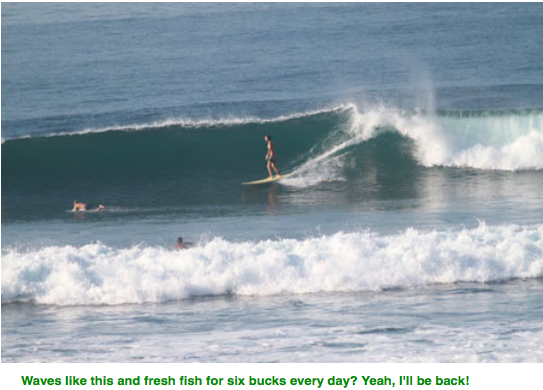 I just got back from a week in El Salvador with my wife and daughter, and while the trip got off to a rough start — full of delayed flights and lost luggage — we ended up having a GREAT time.

You might think it’s a little crazy to spend spring break in a Central American country that boasts one of the highest murder rates in the world. But as I recently explained in my latest issue of Income Superstars, it is precisely those kind of headline worries that create opportunities for savvy travelers.

We stayed in a luxurious oceanfront room, with its own private plunge pool on the balcony, for less than I’ve paid at a budget hotel in Florida.

When I got out of the surf, a guy stood ready to grab my board, throw a towel over my head, and hand me a bottle of cold water — services I would never request but that were just customary in a place that aims to please.

We never spent more than $25 on dinner — for a family of three, including drinks. The typical entrée of local fish, veggies, and corn tortillas was going for about $6 at one of the “fancier” places in town.

On one excursion, my guide pointed out some houses in a new beachfront community and noted they were selling for about $100,000. Speaking of which, El Salvador is officially on the U.S. dollar and has been since the early 2000s.

And healthcare? It’s universal, though I definitely had no desire to visit the nearest hospital about 45 minutes away in San Salvador.

Obviously, visiting a place like El Salvador isn’t for everyone. And choosing to stay there for a longer period of time is probably out of the question for many more. So Let Me Ask: Would You Ever Consider Retiring to a Foreign Country?

In just the last year, I’ve been to France, Germany, Italy, Mexico, and El Salvador. And quite frankly, I could have stayed in any one of those places for months on end. The same is true of other countries I’ve visited whether you’re talking about South Africa or Peru.

More importantly, just about everywhere I’ve been I’ve met fellow Americans who are doing just that — living out their dreams in picturesque towns that most people only see on postcards.

Indeed, more and more U.S. citizens are choosing to live abroad — even if it’s just through VERY extended vacations — so they can stretch their retirement dollars further, gain access to affordable medical care, have new adventures, even hire personal assistants for less than a daily meal at McDonald’s.

Consider Panama, a country I visited back in 2001 …

There are spectacular and affordable beachfront condos that you can rent for a few hundred bucks a month.

And on the kind of budget that wouldn’t even cover rent here in the U.S., an expat can retire in impressive comfort in Panama, thanks in part to the country’s special Pensionado program.

You’ve probably heard of it — a special program that allows income-earning foreign retirees to obtain indefinite residence in the country plus get a whole host of other benefits including big discounts on movies, concerts, bus fares, medical services, and a whole array of other things.

Or what about Thailand, which I traveled to eight years ago …

I personally know a number of U.S. citizens who now live there at a fraction of what they spent here. I’m talking about personal chefs, nightly massages, high-speed Internet connections, and beachfront accommodations for less than renting an apartment in Philadelphia or Kansas City.

And although it’s still on my “to visit” list, Ecuador also provides an attractive package for American retirees — including discounts on many services plus the ability to participate in the country’s national retirement system for about $60 a month.

I could keep going all day … Nicaragua, Costa Rica, Malaysia, and countless other places that provide bountiful benefits worth exploring.

Heck, I have one friend near retirement who plans on buying a sailboat and spending the first part of his golden years going wherever he wants!

At the end of the day, the point I’m trying to drive home is that increasing income is certainly one way to better your situation no matter what your age. But changing your perspective, cutting costs, and considering less-traveled paths is certainly another — and complementary — way to get the things you want out of life.

So get out there and do some research. You’ll be amazed at what you find. And if you’re already living your dream, don’t hesitate to write in and tell me about it!