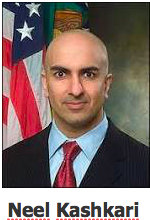 As you probably heard by now, Neel Kashkari was named president of the Minneapolis Fed.

Ordinarily, when a regional Federal Reserve bank gets a new president, it is not national news. Patrick Harker at the Philly Fed—crickets.

But Neel Kashkari is something of a celebrity. Most recently, he ran for governor of California. He had some good ideas that didn’t involve raising state income taxes to exorbitant levels. He even beat incumbent Governor Jerry Brown so badly at their only debate that Brown refused to participate in any more debates.

But in the end, it was hard for Kashkari to shed the Republican stigma in California—even as a pro-choice, pro-marriage-equality Republican. He lost, but not ignominiously. Nobody expected a Republican to win in California.

Before that, Kashkari ran equities at PIMCO (a big deal), but most people remember him for being the administrator of TARP, otherwise known as the Troubled Assets Relief Program, otherwise known as “The Bank Bailouts,” conducted under Treasury Secretary Hank Paulson in 2008-2009.

Before that, Kashkari worked at Goldman Sachs.

Outside of the resume bullet points, who, exactly, is Neel Kashkari?

That’s right, Neel Kashkari is not an economist. He is actually an engineer by training, with a Wharton MBA. I’m sure he will fit in great at the Fed (sarcasm).

I can’t tell you how pleased I am that a non-economist will be joining the Fed.

People have spent the last 48 hours poring over Kashkari’s Twitter feed to divine his monetary policy views. Kashkari admittedly does not have the most authoritative voice on social media, sometimes veering off to talk about things like cheap plane tickets on Twitter. I’ve been following him for years and haven’t gotten much out of it.

Suffice to say that Kashkari is probably going to be a hawk. Perhaps not in the mold of Thomas Hoenig or even Richard Fisher, but he is certainly not a dove. Many people also thought Ben Bernanke was a policy dove, but he really wasn’t. He was a registered Republican, and his thoughts on quantitative easing were shaped by his research into the Great Depression.

Kashkari publicly disapproved of Yellen’s nomination. He would seem to have some ideas on how things should be run differently.

Anyone else as Minneapolis Fed president wouldn’t pose much of a threat to the current monetary policy orthodoxy, but Kashkari is something of a celebrity and political lightning rod—someone who has ties to the media, someone with a megaphone who can make things really difficult for Yellen and Fisher. Translation: he is going to be a big pain in the ass.

Of course, outgoing Minneapolis Fed President Narayana Kocherlakota was equally outspoken—the other way. He was the most dovish member of the Fed, most recently advocating for negative interest rates. My sense is that the Minneapolis Fed board of directors accelerated his departure.

What it means, potentially, is that we will have one outspoken FOMC member (in 2017) agitating for higher interest rates who will probably get on TV even more than St. Louis Fed President James Bullard. So lots of drama, lots of theatrics, and lots of fireworks.

We will probably also have certain politicians again complaining about the nomination process for regional Fed presidents. That’s three Goldman Sachs alumni in a row.

Some people will call Kashkari a lightweight. I would not underestimate him. (I do not underestimate anybody.) They are going to plunk a free-market capitalist with an engineering degree and an MBA in the middle of all the professors and see what happens.

I do think it is important to note that I have reversed/modified my earlier call that there would be no rate hike in 2017. There will be a rate hike in December, but then none all of next year. The same political constraints apply. I updated my view about two weeks ago in The Daily Dirtnap, after the October meeting.

But when Kashkari finds himself on the FOMC in 2017, it will be right after the elections, giving the Fed free rein to do pretty much whatever it wants. If the consensus is that the Fed is “behind the curve,” expect them to catch up very quickly.

2017 will be an exciting year for the bond market—and not in a good way.

For those of you who want to get my thoughts on such things on a more frequent basis, consider a subscription.

Jared’s premium investment service, Bull’s Eye Investor, is available now. Click here for our introductory offer. For Jared, no asset class or type of investment is off limits. From an iconic sports outfitter to a particularly liquid frontier-market ETF—Jared picks the best vehicles for his subscribers to profit from tomorrow’s trends today. Put Jared’s ingenious mix of market analysis and trader’s intuition to work in your portfolio today. Follow Jared on Twitter at @dailydirtnap.