Reflections on the ‘Sure Trade’ of 2014; Yield Curve Inversion Possible? Five ‘Sure Things’ for 2015? 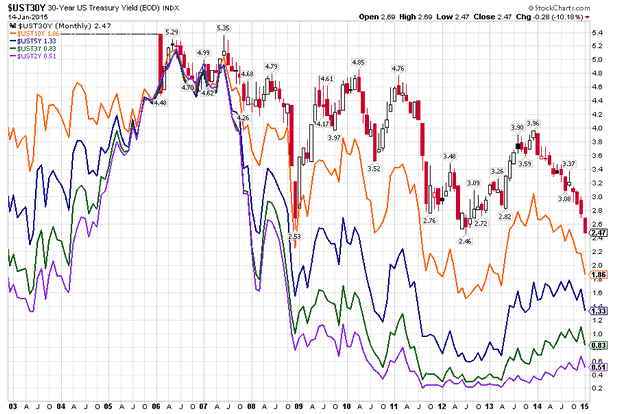 100% of economists predicted yields on the long end of the US treasury curve would rise in 2014. Instead, they dropped all year. In contrast to economist predictions, the long end of the yield curve fell 1.49 percentage points (149 basis points). That the equivalent of 6 quarter point cuts, not hikes.

Buying the extreme long end of the curve while shorting 2- and 3-year treasuries would have gained both directions especially if one did the latter on the few small yield rallies that did take place. In addition to the rally on the long end of the curve, every possible spread between 2-year and 30-year treasuries all tightened!

If the economy was getting stronger, yields on the long end of the curve would be rising and spreads would be widening as well.

The bond market does not believe the recovery will strengthen and neither do I. In fact, I suggest we are on the cusp of recession (something I have admittedly been wrong about before).

With the Fed still holding the short end of the curve near zero, collapsing yields on the long end coupled with tightening spreads to the downside is about as big a recession indicator as one could expect.

The typical sign of recession, an inverted yield curve with 3-month treasuries yielding more than 30-year treasuries (we saw in 2000 and again in 2006-2007) is not going to happen in the absence of rate hikes.

Yet, looking at actual spreads, I do see room for possible inversions on some parts of the curve. For example the 30yr-10Yr spread is only 61 basis points (narrowing from 92 basis points). The 5Yr-3Yr spread is 50 basis points (about half of what it was at the beginning of 2014).

If the Fed does pull off a round or two of tightening, we could see portions of the curve invert, and I would actually expect that.

I have not seen anyone else even discuss the possibility.

I strongly suspect one or more allegedly “sure things” for 2015 will not happen.

I take the other side of those bets, adding that if the Fed does manage to pull off a couple hikes, they will quickly reverse in 2016 as the entire global economy sinks.

For further discussion regarding the strength of the economy, please see …