Refinance debt with 100-year bonds, OR … 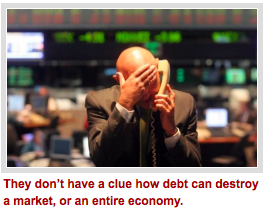 That’s what a lot of analysts and economists are now proposing. Guys like Larry Kudlow, consulting to President-elect Trump, and in line for the Chairman of the Council of Economic Advisors.

Mexico, believe it or not, has already issued three 100-year bonds since 2010.

First, the average duration of marketable Treasury bonds held by the public has been roughly five years for a very long time. That’s not likely to change much, even if maturities are extended. Or so they think.

Second, Treasury’s held in public hands have moved up from 32 percent of GDP back in 2008 to 74 percent today. So, despite all our problems, economists basically believe debt isn’t hurting us.

Well, if that’s the case, does that really justify extending maturities and adding on our debt? Are these MBAs and PHDs just brain dead? Have they never traded the markets?

Probably not. They don’t have a clue how debt can destroy a market, a sector, entire industries and even an entire economy.

Third, they claim extending or refinancing debt would somehow save the country hundreds of billions in interest expense.

How so? All it does is kick the can down the road. Meanwhile, interest expense for fiscal 2016 is nearly $250 billion.

And it assumes that the average duration would remain five years and that the debt would not increase above the current 74 percent. Once again, the economists assume “no unintended consequences” in their thinking — which is always where things come back to bite them — and us.

And what if rates rise, as they are now doing? That would compound the interest expense repeatedly.

The principal value of those long-dated bonds would crash faster than you can bat an eye, way faster than the crash just experienced in the 30-year Treasury, which lost $108,497 of its value (based on $1,000,000 face value bond) — an astounding 10 percent — in just 26 trading days.

Excuse me, but I think issuing longer-dated Treasuries is …

3. A sign of great weakness to your foreign trade and credit sources.

4. A major Achilles’ heel in our economy.

5. A major mistake, if implemented.

I’ll pontificate a bit (and cover the following thoughts in greater detail in the new year).

1. The U.S. government should be outlawed from going into debt even by one penny.

2. The current fiscal budget is roughly $3.8 trillion or 21 percent of the U.S. economy. Cut the budget to under 17 percent.

3. Shut down the Internal Revenue Service and implement a national sales tax of 17 percent that essentially funds the federal government.

4. Implement the same concepts on a state and municipal level.

5. In the event of a natural disaster, or even war, issue no debt and instead … print the money needed to cover the expenses. Inflationary? No. We’ve printed trillions already and has it stirred up inflation? No.

But never do so without submitting the plan to the people for approval. The Treasury and Congress will have no control. Only the people.

6. Convert existing national debt into equity and distribute those shares to the American population based on a fair formula to be decided. Essentially, do a debt-for-equity swap. Float the U.S. shares on the NYSE and prohibit foreign ownership of said shares.

7. Negotiate debt relief with our creditors. They all depend upon us for economic growth. Take a haircut on what we owe you or face slowing economic growth or perhaps even trade tariffs.

8. Work together to design a debt-free monetary system with a neutral world reserve currency, a big benefit for all.

Sound impossible? I don’t think so. But what I do know is that 100-year or even 50-year bonds are NOT the answer.

Call me crazy if you wish, but someone needs to wake up and think differently about the future. If President-elect Trump or advisors like Larry Kudlow can’t, then I’ll simply keep pounding the table until they hear me. That I promise you.