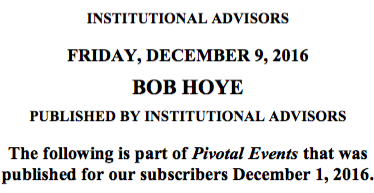 It is uncertain if Krugman knew about the discussion of a gold standard. Possibly not, as he would have become apoplectic and unable to comment. The “ex-bank CEO” is John Allison who recently retired as president of the Cato Institute. Our comment on a convertible dollar has been that it “manages” the ambition of government. This contrasts with the long-running promotion that a committee of experts must have a fiat currency so they can “manage” the economy. In so many words, a convertible currency disciplines predatory bureaucracy.

The Republican platform in the 1980 election included the constraint and honesty of a gold standard. A serious attempt was made, but was derailed by the serious recession that began in 1981. Also, Democrats had the majority in both houses.

With their strongest position since 1928, the Republicans have a mandate for reform. That would be towards a civil service and administration bound by constitutional norms. It is almost startling to think that immigration agencies would obey their own regulations.

Other interesting news is the sharp decline in the November post on the satellite global temperature. This set a big high with the 2015-2016 El Nino and the drop is steeper than the one following the last strong El Nino in 1989. It is now plunging at the fastest pace on the 28-year record.

A few months ago, climatologist Roy Spencer updated the chart. This showed the decline needed a significant plunge to resume the 18-year flat trend. It looked a long way, but it is almost there now.

The main forces acting to restore the flat-lining trend are that the El Nino weather-event is over and the Solar Minimum, which is a climate event, continues. November 22nd and 23rd set two “zero” days, making 25 for the year. The last cyclical minimum clocked 260 “spotless” days in 2009 and 51 days in 2010.

Inspired by experts, the overbearing state needs to maintain the front of omniscience as well as the endless funding. More and more people are becoming indifferent to its climate propaganda. A cool winter could spread skepticism.

And we all know that state funding relies upon the perpetual financial bubble. The plunge in long-dated Treasuries since July is serious. The crash in Municipal bonds is worse. The bond bubble is in the early stages of a profound deflation.

We have had two reasons for the firming dollar. One is the chart pattern and the other will be debt service into New York payable in US dollars. Now, there is another reason. The Republican majority will redirect the Federal Reserve from reckless speculation to prudence. This could be disquieting to interventionist economists. They could eventually be reduced from rent-seekers to real job seekers. How many reckless economists can The New York Times hire a columnists?

On the chart, the DX needed to rise through the 20-Week ema, which was accomplished on October 1st at 95.5. At the 101 level now, there is resistance at the 102 level. Our longer-term target has been 112.

With firming commodities, the Canadian dollar has recovered from 73.59 in early November to 74.50. Getting above the 20-Week ema at 75.35 would be constructive.

There are some cross-currents, which can be fun if you are a white-water kayaker. In the financial markets, it can be an intellectual challenge.

With the intent of making financial speculation perpetual, central bank recklessness became unlimited. Market distortions are without precedent and we all know about reversion to the mean. As in central bank practices. The most distorted market is that for interest rates.

Politics and finance can never be separated and history is working on a profound change. People are taking political power from the “experts” into their own hands, which is constructive. This will also involve the equivalent in finance. The confection of a national currency has been to serve the state, not the markets. On the Great Reformation, the public will “privatize” national currencies by forcing convertibility. Gold has always provided the best choice.

A complete reformation will include making the senior currency convertible into gold. In anticipation of this, one would not buy gold or Treasuries. It will take a few years.

As part of the last Great Reformation, in 1717 Isaac Newton put England on to a bi- metallic standard. This became a simple gold standard.

In the meantime, the prospect of a firming dollar prevents us from getting excited about a possible outstanding rally for gold in US dollars. The same holds for silver, making this another ideal time to avoid fundamental studies that “prove” there is a “concerning” shortage of silver.

As noted last week, gold stocks relative to the bullion price will need to end the decline that began in early August.

Using HUI/Gold, the worst was 142 in early November. The next low was 144 and at 150 now, breaking above 155 would be constructive. Getting above the 50-Day at 163 would set the uptrend. With some technical improvement in this indicator, one could begin to accumulate gold stocks. Lightening up on the hot coal and base metal stocks would also be timely.