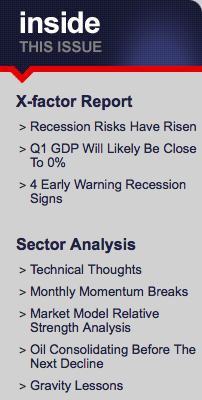 I began writing several months ago that the fall in oil prices and subsequently gasoline prices, was not the economic “nirvana” that mainstream economists had hoped. To wit:

“Graphically, we can show this by analyzing real (inflation adjusted) gasoline prices compared to total Personal Consumption Expenditures (PCE). I am using “PCE”  as it is the broadest measure of consumer spending and comprises almost 70% of the entire GDP calculation.”

The vertical orange line shows peaks in gasoline prices that should correspond(according to mainstream consensus) to a subsequent increase in retail sales.

The reason is that falling oil prices are a bigger drag on economic growth than the incremental ‘savings’ received by the consumer.”

Of course, those same economists, unable to accept the reality demonstrated by the data, now suggest that:

“Oh…the consumer decided to SAVE all those savings from low gas prices instead of spending them.”

No..that would be wrong also.

“Last quarter, when we showed what was ‘The Reason For The ‘Surge’ In Q3 GDP’, some were shocked to learn that in the quarter in which US GDP posted a 5% surge, it was none other than Obamacare – a mandatory tax according to the Supreme Court which has the benefit of flowing through the US income statement – which contributed the bulk of this upside.”