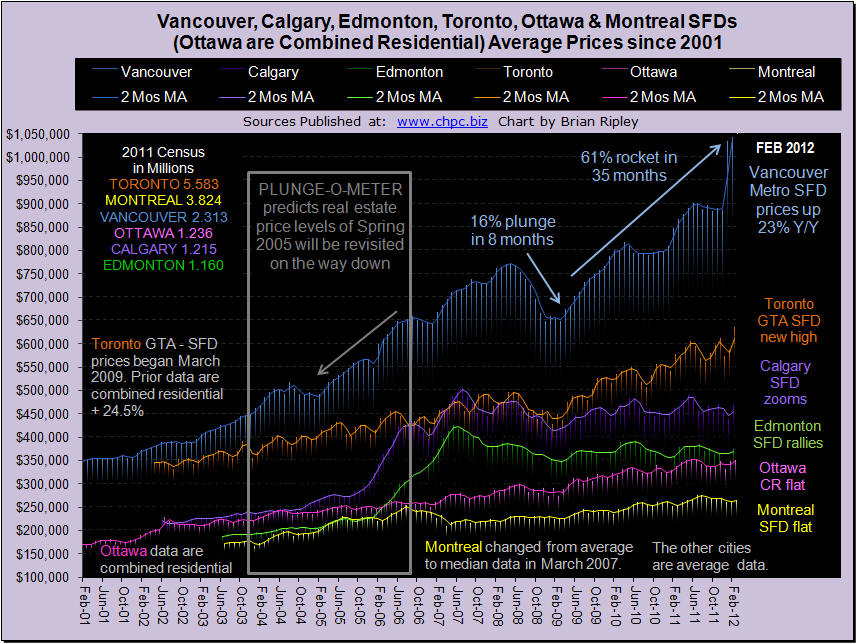 In February 2012 urban flippers filled with brio managed to persuade equally jacked up buyers to bid up prices on detached dwellings. New highs were set in Toronto and really new highs in Vancouver. The chart above shows the detached housing prices for Vancouver, Calgary, Edmonton, Toronto, Ottawa* and Montréal (*Ottawa are combined residential).

Toronto might be the real deal as sales volumes were positively positive; but in Vancouver although the M/M sales looked robust, the Y/Y numbers continue to deflate down 15-21% …and that’s a definite trend (Scorecard). Calgary and Edmonton scratched together a solid rally with SFD’s up 7.1% and 3.4% M/M but their peak prices happened years ago in the Spring and Summer of 2007 (Plunge-O-Meter). Ottawa and Montreal put in marginally higher prices.

The party is being refreshed with mortgage rate come-ons as long interest rates dip and the 10yr less the 2yr spread continues to narrow (33rd month). The last time this happened was the spread narrowing from Spring 2004 to Summer 2007 which set up the crash in the summer and fall of 2008. It’s an interesting comparison; we shall see if the summer of 2012 sets up the same.