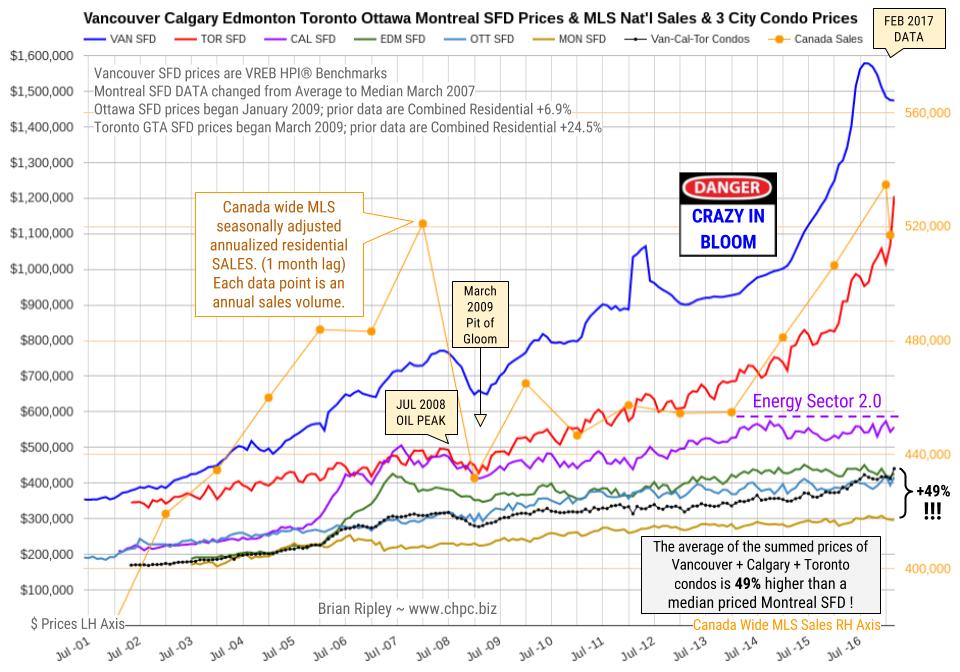 The chart above shows the average detached housing prices for Vancouver*, Calgary, Edmonton, Toronto*, Ottawa* and Montréal* (the six Canadian cities with over a million people each) as well as the average of the sum of Vancouver, Calgary and Toronto condo (apartment) prices on the left axis. ​On the right axis is the seasonally adjusted annualized rate (SAAR) of MLS® Residential Sales across Canada (one month lag).

​​In February 2017 Canada’s big city metro SFD prices coiled about or slid off their near term highs except in Toronto where detached houses,town houses and condos fetched new peak prices. Anyone owning a house in the scorching hot Toronto  market is sitting on an unredeemed lottery ticket. In Vancouver scorched earth ruins are beginning to appear. Notice Calgary prices are labouring under the new Energy Sector 2.0 which could be anticipating the Trumpster’s U.S. energy independence.

High net worth trophy hunters have spent the last few years picking off well located SFD properties in hot markets while the hoi polloi settled for anything before being “priced out“. Are they going to enjoy being “priced in“?

CMHC is not so sure. In November 2015 CMHC had a private audience in New York City and brought along a stress test of $35/bbl oil and its potential effect on Canada. I covered the bullet points here. The Department of Finance is also worried:

The age-related deceleration in economic growth in Canada will take place amidst other powerful, slow-moving global forces. As in Canada, the world population is aging and productivity growth (Canadian Productivity Chart bottom of this page) has slowed across OECD countries. These structural forces are paving the way to slower global growth for the next number of years. Slower nominal GDP growth will thus reduce the growth rate of government revenues, thereby limiting the capacity of governments to continue to maintain the growth rates of public expenditure at levels as high as in the past. At the same time, population aging is also expected to put upward pressure on public expenditure, notably for age-related programs such as elderly benefits. Department of Finance Canada December 2016

When earnings drop so do asset prices. ​Wage earners needed to buy a single family detached house in: Vancouver: 3.2, in Toronto: 2.0, in Calgary: 0.9 and in Montreal: 0.7

​It remains interesting to note that the combined average sum price of a Vancouver, Calgary & Toronto condo is currently 49% (no typo) more expensive than a median priced Montreal SFD. The record previously was 41% in July 2016 (the Vancouver peak).